The Architect of Art Deco, Part One

The architectural counterpart to Le Corbusier and his purist radical modern architecture was the less purist less radical yet still modern architecture of Robert Mallet-Stevens. Time and shifting interest has shunted Mallet-Stevens to one side, while headlining Le Corbusier, and yet Mallet-Stevens was far more persuasive in his own time in the popularization of Art Deco architecture. One could argue that most of the Art Deco architecture of note in Paris was his work. Robert Mallet-Stevens, a most elegant architect, who resembled the dancer Fred Astaire, was to the manor born. Specifically, he was born in Maison Lafitte, a seventeenth century home designed by François Mansart, after whom the famous “Mansard Roof,” the signature architectural look for that century in France, was named. The son and grandson of art dealers, Mallet-Stevens was very well connected: his mother, the source of his name “Stevens” was the niece of the well-known painter from Belgium, Alfred Stevens. 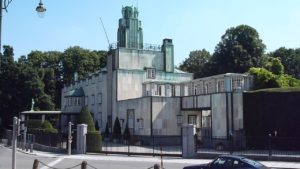 Another member of the Stevens family, Suzanne, had married very well, to none other than Adolphe Stoclet, whose famous home in Brussels was designed in 1911 by Austrian designer, Josef Hoffmann. The influence of Hoffmann’s Palais Stoclet tempered the modernist architecture of Mallet-Stevens whose practice was focused mostly on domestic architecture for a wealthy avant-garde clientele. He designed an elegant studio for the painter Tamara de Lempicka; he began a new home on a hillside for Paul Poiret, but the 1921 villa was never completed, and he created the exquisite Villa Noailles for Charles and Marie-Laure, the Vicomte and Vicomtesse de Noailles, descendants of the Marquis de Sade. This yellow-bricked home was a collaborative exercise for the noble couple, and the design team included Eileen Gray and Theo van Doesberg.

Mallet-Stevens paused in this project in Hyères when he was invited to participate in the Paris fair of 1925, the International Exhibition of Modern Decorative and Industrial Arts. His signature work for the Exhibition was a towering Tourist Pavillon, which had a place of pride at the Exhibition, at the entryway transition. Its tall and narrow tower made for an impressive display of the abilities of reinforced concrete, a strong statement, announcing the arrival of modern architecture in a distinctive Art Deco style. The Tourist Pavillon, unlike Le Corbusier’s Pavillon de l’Esprit Nouveau, was placed advantageously, adjacent to the Grand Palais, creating a strong comparison between the eclectic structure from 1900 and the daring upward march of the Pavillon’s tower, built only twenty-five years later. Interestingly, Le Corbusier’s Pavillion was also in the sight line of the Palais, but he deliberately cropped the older building out to give the illusion that his radical building stood alone, like a work of sculpture. More than an announcement or an introduction to the Fairgrounds, the structure by Robert Mallet-Stevens marked the difference a new century had made and closed the door on a terrible war. 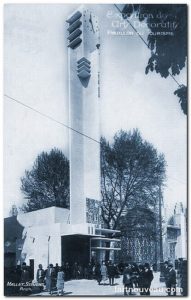 In opening the entrance to the future, the tall vertical for this soaring structure became an exclamation point of a building, topped by a clock face. The sharp tower rose above its counterpart, a long narrow building devoted to Fair information, a horizontal dash adjoining the vertical. The best way to describe the style of Mallet-Stevens was “mannerist.” In contrast to the architectural system devised by Le Corbusier—the concrete columns, the ribbon windows, the open plan, and so on—Mallet-Stevens was the decorator who adorned the surfaces of geometric forms and he often acted as the multiplier of the modernist cube, which he was stack vertically or would arrange horizontally. At the top of shaft of the tower over the entry for the Tourist Pavilion, he mounted non-functional rectangular wafers shapes inserted into the structure, rather like a set of blades had flown in and had become embedded in the spire. The vertical of the clock tower played off the horizontal juxtaposition of two long extensions, which were The Pavillon itself was a two level horizontal extension, stretching out behind the clock tower, as if the vertical member was duplicated and then grounded. The exterior sides of the long grounded hall were studded with non-functional pegs popping out along the lengths of the two halls. 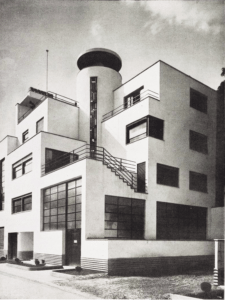 If Robert Mallet-Stevens was an architect of the twentieth century, he was less a creator of new forms and more of a hunter-gatherer who acted like a bricoleur who borrowed modern shapes from late Cubism, from radical architecture, from Mondrian, juggling concepts and playing with philosophies and theories and turning them into style. Although Mallet-Stevens was termed a “Functionalist,” much like Le Corbusier, but he took the elements of modern design, such as the glazed window walls, cantilevered overhangs, exterior staircases and played with them, as if he were juggling a multiplicity of geometric shapes and allowing them to coalesce into a single complex building. As a multiplier of geometric forms, Mallet-Stevens was also an assemblage artist, putting section upon section together. On the street that bears his name, a short street in Paris where six of his domestic homes are clustered, one can see his sheer exuberance in stacking cubes, one on top of another, a balancing act rather like a Mondrian painting. Instead of restraint, Mallet-Stevens took up the available modern forms, all geometric, borrowed them, displacing them from their radical origins in architectural theory, and deployed the shapes with visible pleasure, engaging in exercises of sensuous elaboration. Adolf Loos would have been suspicious, sensing that the use of the apparently bare and plain forms in such extravagant numbers was somehow decorative and lacking in restraint. Indeed, architects and architectural critics of the 20s and 30s expressed their opinions of Mallet-Stevens, based upon comparing him with his radical and purist counterparts. Sigfried Gideon called him “elegant “and a “formalist.” Marie Dormoy used the term “aesthete.” These were not necessarily compliments, but his work was motivated by forces quite different from the architects who can be termed “modern,” for the term “Art Deco” comes closer to explaining the work of Mallet-Stevens, because his was an architecture of high and self-conscious style.

The desire for elaboration seemed to drive the architect, a prolific furniture designer in his own right, who also created specialized furniture for his homes. The metal chair he created for Mobilier was his take on a Thornet chair. This chair seems to be drawn in black outline around the wooden seat and extended to the legs which are tilted backward and slanted forward, opening its stance to a slightly splayed appearance. The back of the chair is half an oval, contrasted by two straight lines cutting through the middle emptiness. Elegant, simple, and stackable, the chair could be black or white or chrome, wooden seat, cushioned seat or metal seat. 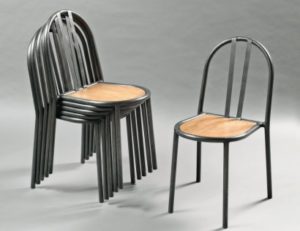 Infinite variability was one of the calling cards of Mallet-Stevens. His wooden chairs were strongly reminiscent of De Stijl, based on a couple of open squares, like his Udara design, using open squares which support two comfortable square cushions. 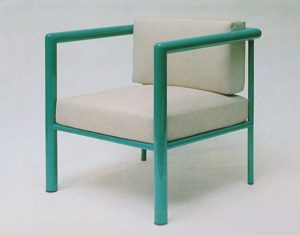 To describe this architect one uses another vocabulary, one alien to radical modern architecture coming out of the Bauhaus in Germany, for example. One would never use the word “Beautiful” to describe a work by Le Corbusier, nor would one say “exaggerated” or “exuberate” when referencing Bauhaus buildings. In addition, the words “associative” or “referential,” much less “quotation,” all of which were outside the discourse of the purity of modern architecture. But Robert Mallet-Stevens was all of these words, with his buildings gesturing towards De Stijl—making allusions to painting—and playful in his delight in throwing architectural elements together. Lacking the rigid theoretical foundations of his contemporaries, he was closer to the Wiener Werkstätte and the idea of the total work of art, a notion quite different from following the rationality of the machine and the logic of structural construction. As opposed to thinking of architecture as form, Mallet-Stevens seemed to think of a building as a presence in the environment, casting a spell, creating a mood, and, most of all, setting a scene. In his placement of a building, in his creation of a sense of place, Mallet-Stevens practiced a mise-en-scène approach, setting a stage for a work of architecture in the same way he designed the sets for the films he worked on. Buildings are presented and displayed, set at their best vantage point, drawing the viewer towards the site, moving forward expecting more delights to unfold as she or he is drawn towards the building-as-display. 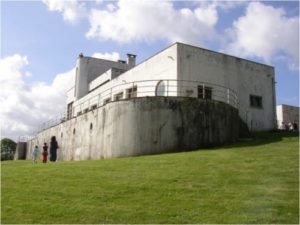 The Villa Poiret (1925) near Mézy-sur-Seine was a case in point, where the architect, acting like a set designer, placed a long white building on the crest of a hill, sited so that the fashion designer, Paul Poiret, could watch races on the river below. The visitor, then, inevitably approaches from below and is asked to look up to the top of the hill. The Villa takes on an aloof appearance, blindingly white in the strong sun, refusing to blend into the surroundings. In contrast, Le Corbusier’s contemporaneous work, the Villa Savoye, has no vantage point, no particular environment, and is presented rather baldly, like a white box on a flat plate. The Villa Savoye can claim an exchange between the inside and outside, thanks to its ribbon windows and roof garden, but it does not respond to the setting. Alone it stands with the aloofness of a sculpture on a socle. This independence is precisely what the architect intended. However, Mallet-Stevens always reacted to the site and used to the advantage of the building, to show off his design, so to speak. Depending upon how it is photographed, the building for Paul Poiret has the look of an ocean liner, cresting the rolling waves of the green hill, with a pair of exterior staircases, one of the architect’s favorite devices, making a V at a corner to stress the appearance of the prow of a ship, pushing the ocean aside. 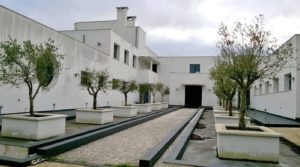 Viewed from the other side, there is a curved wall that resembles the promenade deck of a ship. As if to enhance the illusion of being a sea-going vessel, the wall was punctuated by small square openings that look like portholes on the side of an ocean liner. From another angle, the Villa is deeply reminiscent of the Palais Stocolet in its memories of restrained ornament. The entire structure is a textbook example of how to use reinforced concrete to take advantage of the support system to open the walls. As a result, some windows are large, some are medium sized, some are round, some are square, some rise floor to ceiling, balancing each other in a patterned asymmetrical harmony, like a Mondrian painting. This referencing to another medium, the play between the actual water at the bottom of the hill and the suggestion of the mounds of earth being ocean waves, hoisting the ship/house above towards the sky–all of these conceptual moves by Robert Mallet-Stevens were alien to modern architecture but integral to Art Deco design.

The next post will discuss Part Two on this architect.