The Definition of the Avant-Garde

FINDING THE AVANT-GARDE
Theory of the Avant-Garde

In his book, The Theory of the Avant-Garde (1984), Peter Bürger stressed the historical basis of the avant-garde.  The rise of the avant-garde was directly linked to the rise of the middle class and its allegiance to capitalism and commodification. The main role of the avant-garde is the critique of the middle class by detaching it self from it.  Bourgeois totalizing institutions, such as the institutions that are the “art world” must also be critiqued and defied. The kind of critique Bürger discussed was a Marxist style critique, which, because it was delivered from a detached perspective, was far more radical than conventional criticism. The Marxist approach was, of course Kantian in origin in its stance of disinterest, but Marxist in its focus on bourgeois practices. The founding generation of the avant-garde in France are undoubtedly unknown and only the successful artists, such as Gustave Flaubert, left a mark on history. Even those who were successful lived within their own times, more of less aware of their avant-garde endeavors but unable to speak to future generations. In the absence of direct testimony, writers of the avant-garde one hundred years later were theorists.

There seemed to be two levels of avant-garde reactions in the artistic communities in the nineteenth century, that of rebellion against the prevailing order, whether the establishment or the the public, or reaction against the sudden surge of modern capitalism which turned making art into merely another way of making a living. According to these theories, such as those of Bürger, the avant-garde artist took a separatist stance, neither part of the bourgeoisie from whence he came nor part of the establishment he so desperately longs to recognize him. Most theories do not stress the fact that we would not even have a concept of the avant-garde if certain artists had not “crossed over” into the realm of the establishment where they were finally “seen.” Most avant-garde artists were avant-garde because they were unknown, not because they wanted to be ignored and scorned. But according to the theories of the avant-garde, the radicality of the avant-garde position rests upon its freedom from having to “take sides” or obligation to maintain a position. For Bürger, the freedom to detach from an ideology is also the freedom to find an entirely unexpected stance, meaning that the artist is engaged in a critical analysis of society. The avant-garde critique of the capitalist mode of production and its impact upon cultural producers, artists, has many consequences.

First, the avant-garde artist is always alienated from the audience, outside the mainstream of traditional art and scornful of the middle class and its utilitarian preferences. The bourgeoisie saw little use for pure art in the service of the intellect or beauty or aesthetics, and understood only that art could be useful to reinforce their own social and political power, a lesson learned from the once powerful church and state. The middle class audience was unsympathetic with art, except as entertainment, and uninterested in avant-garde which lay outside what was familiar, traditional and recognizable. Thus, the artist, who felt constrained by bourgeois restrictions and by the low level of middle class taste, took on a defiant, rebellious stance, upholding the right of the artist to express him/herself artistically. Delighting in shocking the art public, the avant-garde artist was, according to romantic legend, confrontational, refusing to meet the expectations of the middle class audience. Instead of striving for acceptance, the avant-garde artist remains outside and alienated in order to critique middle class values, which placed money above love, status above mercy, work above play, and matter over mind.

Avant-garde art, in challenging middle class pragmatism also challenged middle class power.  Often this art directly or indirectly exposed middle class hypocrisy. Gustave Courbet routinely catered to the bourgeois male’s desire for soft-core pornography and Édouard Manet and Edgar Degas depicted the thriving sex trade of mid nineteenth century Paris fueled by the insatiable urban male with some disposable income. Sunny and beautiful on the surface, many Impressionist paintings actually depicted well-known meeting places of scandalous encounters between prostitutes and their clients.  Although today the meaning of these paintings may be lost on today’s viewers, the audience of the day was fully aware that the subjects of these artists were less than respectable. Starting with the proto-Romanticism of Jean-Antoine Gros and Théodore Géricault, the reality of current events were used to confront the public with the unpalatable truth, as shown by Gustave Courbet, or simply with ordinary every day life, as displayed by the Impressionists.

The activity of critique–critique of the system–places the avant-garde artist outside of conventional ways of thinking. But this artist is also in front of the crowd in finding new modes of expressing the unexpressed and the unrealized and thus is making the future of art. Or so we are told. The first separation between the art and that public within the art world can be seen during the Romantic period when certain artists began to represent current events. This shift to reality, as seen in the frozen corpses at the bottom of Napoléon on the Battlefield of Eylau (1807), was an important one. Previously, the Neoclassical approach was an allegorical one, making statements about the present by using past events or using ancient examples to teach lessons for the present. The split between the ancients and the moderns is not simply a stylistic one, from the linear to the painterly, but most significantly, from the past to the present. The avant-garde artists refused to look back to a past that was increasingly irrelevant and insisted upon recording the present.  Eugène Delacroix’s painting Liberty Leading the People (1830) was perceived, not so much as a heroic rendering of a major event in recent French history, but as a political statement valorizing rebellious uprisings. Delacroix himself, like his avant-garde friends, George Sand and Frédéric François Chopin, was inherently conservative and terrified of the revolution he captured. Compared to Neoclassicism, which displaced politics to the past, Romanticism and Realism, were political in that these movements simply in presenting the present. By the middle of the Nineteenth Century, the avant-garde had become political and dangerous to the established powers. 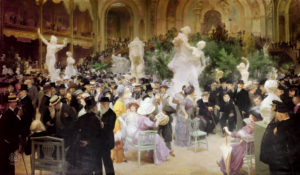 The so-called “difficult” art, from Impressionism to Cubism, was made by an artist, who was outside of official art and beyond public approval. Avant-garde art tended to engender yet another generation of art, even more difficult and even more isolated, in reaction to the previous movement. For example, Manet was part of the academic system and strove all his life to be celebrated in the Salons, but his follower Claude Monet opted to take an independent path and exhibit in private capitalist exhibitions outside of the Salon, while was his colleague, Paul Cézanne, lived the second part of his artistic life exiled in Aix but was studied by the Cubists, Pablo Picasso and Georges Braque. Picasso and Braque were not typical of the avant-garde artists of the twentieth century. Working alone and unrecognized, they were supported by their dealer, Daniel-Henry Kahnweiler and they did not exhibit in public salons. Living in dire poverty, these two artists, like other avant-garde artists, were totally dedicated to their vision and to their belief in their art, a condition made possible by the support of their dealer. Art historians depicted these artists as “heroes,” struggling to maintain personal and artistic integrity in the face of a life without honor and success, understood only by those educated few. That said, it is difficult to maintain the anti-capitalist stance of the theorists of the avant-garde, given the clearly capitalist underpinnings of the avant-garde and its aspirations–to get a dealer and to find patrons and to sell their art. As shall be seen, at the time, the heroes of Cubism were not Picasso and Braque but the Salon Cubists who bravely exposed their innovative work in public salons. The judgment that Braque and Picasso were “leaders” was historical and anachronistic, not in keeping with the actual conditions of the time.

The emergence of the avant-garde artists and the theory of “art-for-art’s sake” coincided with the early decades of the nineteenth century. If the avant-garde was a French notion then the idea of making “art-for-art’s sake” was German. Due to historical and economic forces, the avant-garde and philosophical theories of aesthetics were dependent upon one another: through the idea of “art-for-art’s sake,” artists, now estranged from the art audience, had a philosophical reason for separation. The avant-garde artist, usually of a young generation that had not yet made its mark, did not want to or could not continue to make already established art. The public did not approve of either the style or the content of avant-garde art, and in order to defend and explain this new art, the art critics who supported the avant-garde artists often put forward an appeal for a formalist reading. When Emile Zola demanded that Edouard Manet’s Olympia (1863) be understood in terms of its stylistic innovation, the writer was also insisting that the viewer look away from the often scandalous and socially critical subject matter of a high class prostitute and take note of  the way in which the artist handled the formal elements. Looking at art from a formal and/or disinterested perspective required a new kind of “eye.” The purpose of avant-garde art was, by necessity an aesthetic one.  But as Pierre Bourdieu explained in The Rules of Art: Genesis and Structure of the Literary Field (1996),

Although it appears to itself like a gift of nature, the eye of the nineteenth-century art-lover is the product of history…the pure gaze capable of apprehending the work of art as it demands to be apprehended (in itself and for itself, as form and not as function) is inseparable from the appearance of producers motivated by a pure artistic intention, itself indissociable from the emergence of an autonomous artistic field capable of posing and imposing its own goals in the face of external demands  and it is also inseparable from the corresponding appearance of a population of ‘amateurs’ or ‘connoisseurs’ capable of applying to the works thus produced the ‘pure’ gaze which they call for.

If you have found this material useful, please give credit to
Dr. Jeanne S. M. Willette and Art History Unstuffed.