Art and “Thick Description,” Part One

“Art, Clifford Geertz once remarked, “is notoriously hard to talk about.”  However, Clifford Geertz provided art history with a way to talk about art through material culture. A term familiar to anthropology, “material culture” means the construction of what Geertz termed a “thick description” of a local culture by a detached observer, usually an anthropologist or sociologist, using—of course–the method developed by Geertz himself. A material analysis of a culture encompasses that culture’s actions, ceremonies, rituals, and artifacts for the purpose of semiotically reading a particular event at a singular point in time. The semiotic reading, as Geertz said, cannot be accomplished without the creation of a “thick” or multilayered, “description” of the conditions that make not just the production of meaning but also meaning itself possible. The ultimate outcome of a “Thick Description,” a slice of a culture, goes beyond a thin or shallow semiotic linguistic reading and seeks to understand the way a society thinks. In his book The Interpretation of Cultures, Geertz stated,

The concept of culture I espouse, and whose utility the essays below attempt to demonstrate is essentially a semiotic one. Believing with Max Weber that man is an animal suspended in webs of significance he himself has spun, I take culture to be those webs, and the analysis of it to be therefore not an experimental science in search of law but an interpretive one in search of meaning. It is explication I am after, constructing social expressions on their surface enigmatical.

Later he said, “Culture, this acted document, is public.” In comparison “Thick Description” is a “depth model” compared to Jacques Derrida’s mode of analysis, which stresses the surface of texts and places the reader inside, rather than outside, the field of study. For the study of art history and aesthetics, the word “local” becomes key in relation to a Geertzian understanding of art. In Local Knowledge, Geertz asserted that

The chief problem presented by the sheer phenomenon of aesthetic force, in whatever form and in result of whatever skill it may come, is how to place it within the other modes of social activity, how to incorporate it into the texture of a particular pattern of life. And such placing, the giving to art objects a cultural significance, is always a local matter..

But what is the significance of Material Culture to the study of the history and the philosophy of art? In the best Foucauldrian fashion, one must begin by noting what material culture is not. First, material culture is not connected in any way with Marxism. In fact, Marxism is never mentioned in the discourse of material culture, except to note in passing that Marxists object to Geertz’s lack of attention to issues of class and power. 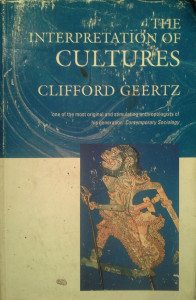 Marxism, whether vulgar, reflexive, neo, or what have you, is a theory, which analyzes a social system from the perspective of that determining engine, economics in general and capitalism in particular. Marxism is a critique of wealth, power, and class oppression. Second, an anthropologist never critiques or judges a culture, nor does s/he have a political or activist agenda—ideally—that is. Marxism also operates in terms of the dialectic: thesis, anti-thesis, synthesis, critiquing the teleological movement, the dynamic movement, of historical forces over time. Material culture, in contrast, is not a theory. As Geertz commented in his book Local Knowledge,

..purist dogmas…of the material determination of consciousness on the social science side may have their uses…but…they head us off precisely in the wrong direction—toward an isolation of the meaning-form aspects of the matter from the practical contexts that give them life..

Geertz never worked out or revealed a theory; rather material culture is a method of study, observation, and elucidation. Finally, the Geertzian method must be synchronic and can never be diachronic or caught up in time. The importance of the synchronic was explained by William Sewell in his chapter on Geertz, “Geertz, Cultural Systems, and History: From Synchrony to Transformation,” in that the anthropologist,

Next, since material culture is a method, not a theory, the procedure stands apart from both modernist and postmodernist theories, while at the same time making use of their theoretical insights. The young anthropologist, Clifford Geertz, began omnivorously consuming, appropriating, and employing a whole array of new ideas tumbling out of that 1960s merging of philosophy and literary theory. Long before the term “blurring the boundaries” of disciplines sunk to genuflected jargon in art history, Geertz found inspiration from Ludwig Wittgenstein, Ferdinand de Saussure, and Michel Foucault. Geertz built a stratified, or thick description, of an object in culture in order to interpret it semiotically in a fixed fashion, but Geertz turned to Ludwig Wittgenstein who unfroze meaning by declaring, in Philosophical Investigations,

For a large class of cases–though not for all—in which we employ the word ‘meaning,’ it can be defined thus: the meaning of a word is its use in the language.

Indeed Geertz attributed his position to

..that posthumous and mind-clearing insurrectionist, “The Later Wittgenstein.” The appearance in 1953, two years after his death, of Philosophical Investigations, and the transformation of what had been but rumors out of Oxbridge into an apparently endlessly generative text, had an enormous impact upon my sense of what I was about and what I hoped to accomplish…I am more than happy to acknowledge Wittgenstein as my master.

In his essay, “Thick Description,” Geertz noted that

..cultural forms find articulation…in various sorts of artifacts and various states of consciousness; but these draw their meaning from the role they play (Wittgenstein would say their “use”) in an ongoing pattern of life, not from any intrinsic relationships they bear to one another.

The quotation on meaning and its “use” by Wittgenstein comes from his Philosophical Investigations, “Part 1, Section 43,” as published by Basil Blackwell in 1953. Elaborating upon the ideas of Geertz, Eric Kline Slverman’s essay, “Clifford Geertz: Towards a More ‘Thick’ Understanding?” noted that

He was the first American anthropologist to employ a textual metaphor for understanding culture. In Geertz’s writings, however, we do not find a single, clearly articulated elaborate theory of the text..His textual metaphor emerges from a series of conceptual themes—it is not one notion of several orientations. Geertz approaches cultural meaning through a symbolic or semiotic framework. He was particularly influenced by Susan Langer..Geertz defines cultural symbols as medals of and models for social reality.

Although Geertz was sometimes lumped together with Roland Barthes and Jacques Derrida, his project is not to read texts but to write texts. Indeed Silverman stated that “Geertz is wary of intertextuality, except in the instance of thinking of parts in terms of the whole or the whole in germs of the parts.” Geertz said in Local Knowledge that

To be of effective use in the study of art, semiotics must move beyond the consideration of signs as means of communication, code to be deciphered, to a consideration of them as modes of thought, idiom to be interpreted…a new diagnostics, a science that can determine the meaning of things for the life that surrounds them..

However, Geertz embraced the postmodern notion that academic and scientific writing is a form of literature or écriture, and he wrote deliberately in a metaphorical style, embracing the Lyotardian concept of the “figure” in the “discourse.” It not that Geertz read Derrida, it is that one can do a Derridan reading of a Geertzian text. Certainly, there is a degree of Kristvian intertextuality in Geertz, but, for a field ethnographer, a word far more suitable than “intertextuality,” would be “connections” or what historian Wilhelm Dilthy called “connectedness” or “context” (Zusammenhand) or Wittgenstein’s “family resemblances” among cultural elements. Dilthy commented,

It is a relationship of whole to parts…Meaning and meaningfulness..are contextual. One would have to await life’s end and could not survey the whole on the basis of which the relations between the parts can be determined until the hour of death. One would have to await the end of history in order to possess the complete material for the determination of its meaning. On the other hand, the whole exists for us insofar as it becomes understandable on the basis of the parts. Understanding always hovers between these two approaches.

Geertz accepted the postmodern concept of a consciousness that is socially and linguistically constructed, but he did so via Emmanuel Kant by way of Ernst Cassirer with a drive-by for Foucault. For Geertz, the individual, or Foucault’s fictive “Man,” was never the object of study. A person is but an actor situated within a thick cultural matrix, acting and reacting, with limited agency, out of pre-existing cognitive structures, a priori producing culture. Marxists, feminists, postcolonial critics have, rightly, criticized Geertz for not including the voices of the dispossessed. The voices of women, for example, cannot be retroactively added to field research for each thick description is bound up in a synchronic moment in time. It can be stated with or without kindness that Geertz was creating his notion of “thick description” in a time in which women and people of color were silenced in philosophy at the very time when they were vocalizing loudly in the streets. It is possible that, with later anthropologists, once silent voices can be included only in a later thick description. That said, at the time, the scholars who surrounded Geertz or who commented on his theories seem to be more interested in the theory than in the practices. According to Stephen Greenblatt, Gilbert Ryle’s

..thick description is manifestly a quality of the explication rather than of the action or text that is explicated; it is not the object that is thick or thin but only the description of it. A thick description thus could be exceedingly straightforward or, alternatively, exceedingly complex, depending on the length of the chain of parasitical intentions and circumstantial detachments..Thickness is not the object; it is in the narrative surroundings, the add-ons, nested frames..Thickness is no longer seems extrinsic to the object, a function solely of the way it is framed.

Clearly, Geertz, like many of his generation was formed from a mélange of cultural forces swirling around during the 1960s. During this fertile period, decades of thinking coalesced and philosophical ideas that dated back to the beginning of the century began to be assimilated and, having been digested, began to emit descendants in further thought. In his way, Clifford Geertz was a prototypical Postmodern thinker who assembled a coalition of concepts that allowed him to further anthropology and to take the new field in new directions, combining field work with philosophy, specifically semiotics. Material culture became a way to “read” a society like a text, but part of any society is its works of culture–art objets. Given a broad mandate as an anthropologist, Geertz would turn his attention to art and delved into the links between art history, art historians, philosophy and semiotics and philosophy–a complex combination of text and image, discussed in the next post.