Bombing the West: Photography and Topographics

The Meaning of “Waste Land”
Mis-Use of the Western Desert

In 1945, the foremost artist of the American West, Georgia O’Keeffe (1887-1986) produced an extraordinary work of art, usually placed harmlessly within her Pelvis series. For the past ten years, O’Keeffe had been studying the animal bones that were scattered over the deserts of New Mexico where she lived. In 1945, she was still commuting between Abiquiu, where she lived on the Ghost Ranch and New York where her frail and ailing husband Alfred Stieglitz (1864-1946) was still living. Every year, she would return for the winter season to show the work of the summer at his gallery, “An American Place.” A remarkable brilliant painting, Pelvis Series, Red with Yellow (1945) that came out of that summer and was shown by Stieglitz at his last exhibition. 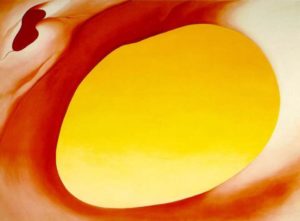 The installation, “Georgia O’Keeffe” featured her most recent paintings from New Mexico and was open from February to March of 1946. Stieglitz would die in July 1946. In between the period when O’Keeffe painted Pelvis Series, Red with Yellow and the death of her husband, the Second World War ended in Europe with a surrender from Germany and in Asia with the capitulation of Japan. But almost exactly a year, within three days of the death of Stieglitz, something remarkable happened in the desert of New Mexico, at Los Alamos precisely forty-one miles away from Abiquiu. On July 16, 1945, between five and six a.m. the sky lit up, not from the dawn, but from the first explosion of an atomic device. They called this test, “Trinity.” According to the Atomic Heritage Foundation, the test was supposed to be “secret,” and, although the entire horizon was lit up, the inhabitants of New Mexico were told that an ammunition dump had exploded. The only color photograph of the event is remarkably like the painting by Georgia O’Keeffe. 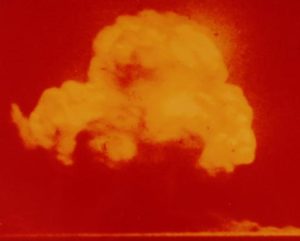 The world’s first nuclear device, the “Gadget,”
was successfully detonated in the New Mexico desert

We know that the atomic scientists who were working at Los Alamos during the last year of the war mixed and mingled with the artists who lived in the nearby artist colonies. The Abiquiu residences were used to not asking questions of the distinguished guests and it is not recorded if anyone, including Georgia O’Keeffe, put the presence of the scientists and the explosion of an ammunition dump together but, with the surrender of Japan a few weeks later, the apparently disparate pieces came together. The resemblance of between the Pelvis painting and the photograph of the blast itself could be purely coincidental, but the match of the colors is striking as is the match between time and place. What astonished those who were allowed to be present were astonished by the array of colors displayed in the mushroom-shaped blast. General Thomas F. Farrell remembered that “the whole country was lighted by a searing light with the intensity many times that of the midday sun. It was golden, purple, violet, gray and blue. It lighted every peak, crevasse, and ridge of the nearby mountain range with a clarity and beauty that cannot be described but must be seen to be imagined. It was that beauty the great poets dream about but describe most poorly and inadequately.” The black and white film of the test is very like later paintings by Adolf Gottlieb’s Blast series, but the light of the bomb was visible to the physicist, Ernest O. Lawrence, who was twelve miles away, and recounted, “I was enveloped with a warm brilliant yellow-white light—from darkness to brilliant sunshine in an instant.” 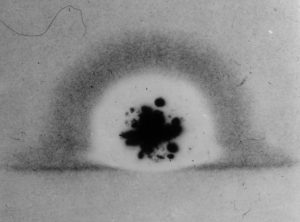 According to The New Yorker, Trinity was filmed exclusively
in black and white and without audio

It is possible that those startled witnesses outside of the military perimeter believed the ammunition dump story because no one had ever seen an atomic bomb explode. In his 2015 article “The First Light of Trinity,” Alex Wellerstein said, “..the plainclothes military police who were stationed in nearby towns reported that those who saw the light seemed to accept the government’s explanation, which was that an ammunition dump had exploded.” It was wartime and the American west had become a vital part of Fortress America, but, in retrospect, it is interesting that the test took place on the American mainland. The Atomic Heritage site explained, “The Alamogordo Bombing and Gunnery Range, 230 miles south of Los Alamos, is most famous for its landmark role as the birthplace of nuclear weapons. The site, located in the Jornada Del Muerto Desert, was chosen for its isolation, flat ground, and lack of windy conditions. Manhattan Project leaders also considered sites elsewhere in New Mexico, as well as in Texas and California. There were very few people living near the Trinity site, and all were paid to leave their land when Manhattan Project officials began constructing the test facility.” 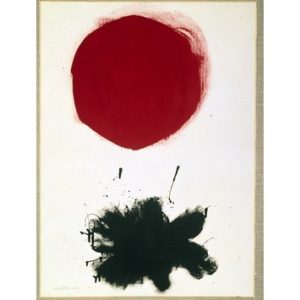 There are keywords in the statement, “desert” and “isolation” suggesting that the minimally inhabited lands were of little value and could be safely obliterated. To be fair, no one knew, at the time, if the bomb would even detonate and no one understood that the land and its inhabitants, both animal and human, would suffer the consequences for years to come. Twice a year, the site of the Trinity test is open for tourists, but the ground is and will be contaminated in the name of peace. Sand frozen into glass can still be viewed scattered about, marking the site where the atomic age came to the desert. Trinity can also be considered the first “nuclear landscape” or what came to also be termed, “sacrifice zone.” The new war called “Cold” demanded new territories where new weapons could be tested and experimented with and upon, terrain that would be “sacrificed” for the greater good or harm, depending upon your perspective. Like the photographers of the Rephotographic Survey Project, a new generation of photographers followed a trail into the American West, and this time the trail led to territories similar to those photographed by the survey parties. It would seem that almost as soon as the West was mapped the wave of settlers who would come decided that the land had to be altered to suit their expectations. The New Topographics artists charted these efforts to remake the desert into a place where people could live as they would back East or in Europe. But there were apparently other sites, perhaps less accessible or less amenable to transformation, lands that could be termed left-over or rejected, because they did not conform to the horizon of expectations for what was considered to be valuable for human use. 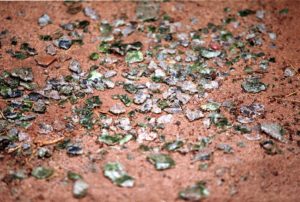 According to The Washington Post, Trinitite, the green, glassy substance
found in the area, is still radioactive and must not be picked up

It would be quite correct to say that, regardless of the spectacular paintings of Albert Bierstadt or the moving photographs of William Henry Jackson or the exciting documents of progress and technology wending its way West by Andrew Russell, that the West, that vast desert that stretched from the Midwest to the Pacific Rim, was never understood by outsiders. By outsiders, one would mean those from the East, who climbed aboard the train that rode all the way from coast to coast, seeking new sights. However, it was necessary for the traveler, uneducated in the geology of the West and unattuned to its distinctive and strange beauty, to skip the boring stretches, otherwise known as the desert. In the book, A New Significance: Re-envisioning the History of the American West, Anne F. Hyde wrote a chapter, “The Significance of Perception,” in which she commented upon the traveler’s disinterest in the western terrain. “When railroad travel made tourism possible in 1869, Americans were eager to find the scenery they craved, and promoters were just as eager to provide it. Unpleasant or inconvenient deserts and plains could be ignored or simply slept through. Instead, promoters advised visitors to focus in California and Colorado, the two places easiest to describe in European terms.” California was “Mediterranean” or “Spanish,” Colorado resembled the Alps and Switzerland. The author quoted a pamphlet from the Denver and Rio Grande Railroad: “All the sublimest glories of the Swiss and Italian Alps, all the picturesque savagery of the Tyrol, and all the softer beauties of Kilarny and Como and Naples dwindle to insignificance by comparison with the stupendous scenes that meet the gaze at every turn in Colorado.” She continued, making the point: “These perceptions of what the West should be, ideas created by a century of cultural preparation, prevented Americans from accepting the facts of the far Western landscape. The result was an unprecedented series of failures. The cultural determination to re-create the West to suit the needs of white Americans left a legacy of environmental destruction and abandoned farms, resort areas, and mines.” 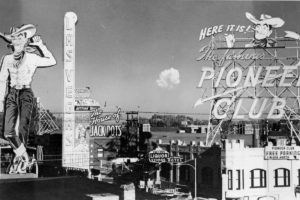 From the Las Vegas Sun, Views of the mushroom cloud from downtown Las Vegas

Hyde was discussing how the nineteenth-century attitude towards what was an acceptable landscape and the terrain that was unacceptable in its natural state and had to be improved. Kansas could be turned into agricultural bounty, but there were other regions, the deserts that could become Las Vegas or Reno, or they would simply be left alone. It is amazing but true, more atomic and hydrogen bombs have been dropped on American and territories than anywhere else. Perhaps because politicians on the east coast did not understand the scenery of the west, these territories were thought to be wastelands of little practical use. For decades, Nevada was bombed constantly by the United States military, and there are vast stretches in the west that are uninhabitable and will be dangerous for hundreds of years to come. The images of these blasted lands, scored and scarred by weapons, are a shocking counterpart to the West found by Andrew Russel or William Hart. Here is a strange and almost unreal beauty and teach the viewer to look again and to see this blasted landscape as having its own unexpected sublimity–the terror of John Pfahl’s nuclear plants shining in the rising sun, pumping out suspicious steam, the horror of Peter Goin’s nuclear testing grounds of polluted soil, the shame of Richard Misrach’s killing fields of dead livestock, put to death by nuclear poisons. The next post will discuss the next generation of topographical photographers; those who have a frank and confrontational political message that mixed environmental responsibility with anti-war messages.