Cubism, Futurism and the Great War, Part One

In 1911, the Futurist artist Umberto Boccioni (1882-1916) organized an exhibition of fifty Futurist paintings for the working class. Called Esposizione d’ate libera, the show featured Carlo Carrà (1881-1966) and Luigi Russolo (1885-1947). This spring showing of Futurist art attracted at least one detractor who defaced the organizer’s work, Laughter (1911). Although Boccioni was routinely lecturing on the topic of dynamism, a major Futurist concept connected to modernity, apparently the artists had yet to find the ideal vehicle for their ideas of speed and movement through space. It was Gino Severini (1883-1966), who lived in Montmartre and who was familiar with the new styles emerging in Paris suggested that the Futurists of Milan visit certain ateliers in his adopted city. It is this fateful fall visit to Paris at the end of 1911, that sealed the fate of the Futurists in the eyes of the French. Immediately the Futurist paintings and sculptures showed the impact of the venture to Paris–Balla painted the childish Dynamism of a Dog on a Leash and Boccioni fashioned Development of a Bottle in Space both early in 1912. What is particularly interesting about the works of 1912 is the abandonment of the visualization of social theories compared to the works of the previous year.

Something had happened to Futurism–its visual and conceptual language became less political and more directed to an abstracted modernity. In her book, Inventing Futurism: The Art and Politics of Artificial Optimism (2009), Christine Poggi discussed Boccioini’s struggle to reconcile politics, class concerns, style and symbolism with the concepts of modern machine propelled dynamics. The Futurist artists were fascinated with technology and were witnesses to the changing relationship between humans and the mechanics of labor but while it was relatively straightforward to write of the abrupt change from traditional to modern,  the precise visual language eluded them. Clearly, the geometrics of Cubism compared to the dappled brushwork of neoimpressionism suggested a more compatible and more expressionistic approach to dynamism. One could say that the Futurists were freed from illustrating and could now express  movement formally and neutrally. To get a sense of how quickly the Futurists had to scramble, adjusting their style from post-Impressionism to what seemed to the Parisians to be a style inspired by their visits to Parisian studios, it needs to be stressed that the Futurist exhibition in Paris opened a mere few months later.

Understandably, the Futurists were very sensitive about being understood in terms of their own context, which would be the writings of their leader, Filippo Tomasso Marinetti (1876-1944). Enamored by speed and enchanted with the force of rapid change, their philosophy was directed towards modernity not only towards modern art but this distinction was lost to the French who saw the stylistic debt owed to the Cubists. Ever since their debut in Paris, February 1912 at the Bernheim-Jeune Gallery, the Futurists had been slighted by the French critics who initially denounced the interlopers as being derivative of Cubism. To be fair, the French were merely striking back. The catalogue essay, written by Umberto Boccioni, was impolitic at best and extremely combative towards Cubism. Futurism and Cubism had developed during the same time, but in different places, and, while the two movements seemed superficially stylistically similar, the goals and aims were quite distinct. Rather than making the concept of Futurism clear and instead of outlining its differences plain in a cool and dispassionate manner, Boccioni took it upon himself to confront the French artists in the famously provocative Futurist manner.

Writing in manifesto-style, the artist stated, among other things that the Cubists “continued to paint objects motionless, frozen, and all the static aspects of Nature; they worship the traditionalism of Poussin, of Ingres, of Camille Corot, ageing and petrifying their art with an obstinate attachment to the past, which to our eyes remains totally incomprehensible.” He asked, referring to the Cubists, “is it indisputable that several aesthetic declarations of our French comrades display a sort of masked academicism? Is it not, indeed, a return to the Academy to declare that the subject, in painting, has a perfectly insignificant value? Boccioni seemed to find the Cubist adherence to tradition particularly worthy of contempt. “..To paint from the posing model as an absurdity, and an act of mental cowardice, even if the model be translated upon the picture in linear, spherical and cubic forms..”

Having read this diatribe, it is no wonder that the art critics and the Cubist artists struck back. Cubist supporter, poet and art critic, Guillaume Apollinaire (1880-1918) took aim at Boccioni’s paintings. ‘This is the most dangerous kind of painting imaginable. It will inevitably lead the Futurist painters to become mere illustrators.” True, the triptych States of Mind (1911) by Boccioni, had been repainted in response to Cubism, but its meaning, as explained in the catalogue stated, “We thus create a sort of emotive ambience, seeking by intuition the sympathies and the links which exist between the exterior (concrete) scene and the interior (abstract) emotion.” To be accused of being “mere illustrators” meant that Futurism would have to fight for its rightful place in avant-garde art as innovators, and, more than that, as true modernists, more modern than staid Cubism. For decades, the Futurists were still considered to be “derivative” of Cubism, but this judgment was based upon a morphological similarity and such a formalist comparison can be very misleading.

First, the word “Cubism” was not a specific term at that time and, second, in the pre-war period, there were many manifestations of  “Cubism” in Paris, from Albert Gleizes to Robert Delaunay and Pablo Picasso, all of which looked to Paul Cézanne as the founding father or the fountainhead of the Parisian avant-garde.  As late as 1978 Georges Édouard Lemaître, writing of modern literature, said bluntly, “Futurism may be considered as a derivation of Cubism.” And this was a very French perspective, lingering long after Apollinaire. But today, contemporary scholarship stresses that which is Italian about Futurism and the 2014 exhibition at the Guggenheim Museum, Italian Futurism 1909-1944: Reconstructing the Universe, attempted to restore the original Futurism, a decades long movement that, regardless of its “derivative” status, inspired numerous movements by simply evoking the word “futurism.” In fact, although the Futurists did not exhibit in the notorious Armory Exhibition in New York in 1913, the words “futurist” or “futurism” were evoked as a synonym for “modern art,” which itself meant “the future.” 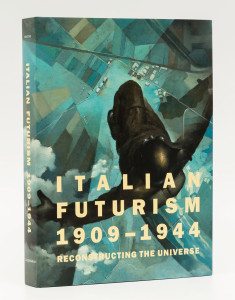 Regardless of what “futurism” would mean in other contexts, the Italian Futurists were aware of the trends in French art and had been exposed to Cubism in its many Parisian manifestations and were well aware that Cubism was advertised as being on a historical line, part of a traditional sequence that extended back to Courbet and linked to Cézanne, who inspired the present avant-garde. The artists certainly had some idea of Cubist philosophy, the aims of the movement, and its historical lineage as put forward by Gleizes and Metzinger in Du Cubisme of 1912. Once the Futurists moved beyond the Paris-Milan trajectory, the chain of mutual awareness was broken and the distinctions between the two movements were lost in translation. The catalogue essay, which followed Marinetti’s famous 1909 Manifesto, spend three or four pages discussing Impressionism and Cubism in order to separate Futurism from French movements. It is unclear how the opening duel with Parisian artists played in other cities, the various Futurist exhibitions in Europe.

This exhibition of thirty-six paintings traveled to London, horrifying the British, an event to which I will return, then landed in Berlin, where it fell into the hands of Herwarth Walden’s Galerie Der Stürm. Here, in Berlin, where French chronology did not matter, Futurism suffered its cruelest fate as it careened from being misunderstood to being misrepresented. From the standpoint of  the international art market, Berlin was, like Paris, a place of exhibition and selling and buying, and to show well in Berlin was extremely important, because here, unlike parochial Paris,  people would buy art from many nations. The marketplace of Berlin was truly international and the artists there were receptive to outside influences. However, the Italian artists were distinctly unhappy with the presentation of Futurism in Berlin. They had reason to be perturbed.

The exhibition which was a month long was accompanied by the catalogue that was traveling with the Futurism art, Zweite Ausstellung : Die Futuristen : Umberto Boccioni, Carlo D. Carra, Luigi Russolo, Gino Severini : Berlin, Königin Augusta-Strasse 51 vom 12. April bis 31. Mii 1912, clearly stating the stance of these artists. The best discussion of the Berlin excursion comes from Günther Berghaus in International Futurism in Arts and Literature (2000). In this book edited by Berghaus, John White, in “Futurism and German Expressionism,” noted that by the time the Futurists reached Berlin, the larger movement was already spreading to literature. The visual artists preferred to not confuse the movement of their international début in the Spring of 1912 and arrived in Berlin as a unified group, minus Balla, represented by Boccioni, and absent a presentation of one of the famous Futurist evenings. White attributed the low key presence of Futurism in Berlin to the minor role the city played in constructing the avant-garde, but Berlin was an important regional depot for modern art, a gathering place as it were for eastern Europe.

It is in this context that Boccioni’s displeasure with the exhibition at the Der Stürm Galerie  can be understood. Given the gallery’s significance as a seller of avant-garde art, the lack of publicity on the part of Walden would have seemed odd to the Italian artist, but, then, this exhibition space hardly needed to advertise. Most importantly, Futurism could not be hung here–installed on the gallery walls–as a movement in its own right, properly distinguished from other artists of other nations. After all Der Stürm was a sales room, not a place where a group of artists could establish their historical role in art. The prothelyzing goals of Futurism was thwarted in Berlin.

White analyzed the way in which Waldern, a master salesperson, marketed the Futurists in ways that were apparently confusing for an artist, like Boccioni, who was on a mission.

It is worth bearing in mind that the main reason for the Italian Futurists’ decision to exhibit in Berlin, the heartland of Expressionism, was the presence of Herwarth Walden, a genius of an impresario with enviable contacts to a whole galaxy of modernist painters sculptors, writers, and musicians. Walden’s copious network of artistic connections, both within Germany and beyond in most of Western Europe,was probably unparalleled. Here was someone through whom Marinetti hoped to establish a bridgehead into German Expressionism.

Whether or not Boccioni was dismayed at the way in which the paintings were arrayed–adjacent to inhospitable neighbors–becomes less important than the impact of Futurism on Expressionism and upon Expressionist artists. On the eve of the Great War, Futurism was caught up in a battle of styles and of attribution, fighting for its place in the emerging twentieth century avant-garde. The catalogue essay written by Boccioni had words of interest to the Expressionists: “We thus arrive at what we call the painting of states of mind.” He wrote of “force-lines.” And a few lines down, the artist presents what seems to be a prediction of the state of war: “Confused and treipdating lines, either straight or curved, mingle with the outlined hurried gestures of people calling one another, will express a sensation of chaotic excitement. On the other hand, horizontal lines, fleeing rapid and jerky, brutally cutting into half lost profiles of faces or crumbling and rebounding fragments of landscape, will give the tumultuous feelings of the persons going away.” Once the war broke out, the position of Futurism as a style suddenly changed. As shall be seen in the next posts, these descriptions will resonate in pre-war paintings of Franz Marc and the most eloquent artists of the Great War, the British painters.