As a literary scholar, Frederic Jameson was trained in the generation of “close reading” and has used literary analysis combined with a neo-Marxism of Karl Marx and the idea of the unconscious of Sigmund Freud to “read” culture through the lens of an economic analysis of the unconscious of society. The theoretical position/s of Jameson are typical of his era, which is Postmodernism, and are therefore hybrid. For him, Postmodernism is the result of a shift in economic conditions when in turn shaped the cultural cognitive. In “Postmodernism and Consumer Society” Jameson carefully explained the connection between Postmodernity and capitalism which functions on the basis of a society that must consume to support the mode of production. In writing of Postmodernism, Jameson said,

It is also, at least in my use, a periodizing concept whose function is to correlate the emergence of new formal features in culture with the emergence of a new type of social life and a new economic order-what is often euphemistically called modernization, postindustrial or consumer society, the society of the media or the spectacle, or multinational capitalism. This new moment of capitalism can be dated from the postwar boom in the United States in the late 1940s and early ’50s or, in France, from the establishment of the Fifth Republic in 1958. The 1960s are in many ways the key transitional period, a period in which the new international order (neocolonialism, the Green Revolution, computerization and electronic information) is at one and the same time set in place and is swept and shaken by its own internal contradictions and by external resistance. I want here to sketch a few of the ways in which the new postmodernism expresses the inner truth of that newly emergent social order of late capitalism, but will haul to limit the description to only two of its significant features, which I will call pastiche and schizophrenia: they will give us a chance to sense the specificity of the postmodernist experience of space and time respectively.

In tracking the marks of late capitalism upon the human consciousness, Jameson used the culture industry as a place where economics and culture and human thought clashed and combined. He considered cinema to be the primary Postmodern art, “the last machine,” as Holis Frampton called it, a product of the most sophisticated form of industrial production. As a cultural form, film is permeated by marketing and lives and dies on its particular modes of production and distribution and the carefully calculated effects upon the audiences. Cinema involves what the theorist called “cognitive mapping”  or the psychology of the “political unconscious.” “ Cognitive Mapping,” with Jameson, who was always conceded with the connection between film and politics, is a metaphor for processes of the political unconscious. In the Preface to Jameson’s The Geopolitical Aesthetic: Cinema and Space in the World Space (1992), Colin McCabe, who remarked that “cognitive mapping is the least articulated but also the most crucial of the Jameson categories,” explained the idea of “cognitive mapping as,

The term is taken from the geographer Kevin Lynch’s The Image of the City (1960) and is used by him to describe the phenomenon by which people make sense of their urban surroundings. Effectively, it works as an intersection of the people to function in the urban spaces through which they move. For Jameson, cognitive mapping is a way of understanding how the individual’s representation of his or her social world can escape the traditional critique of representation because the mapping is intimately related to practice–to the individual’s successful negotiation of urban space. Cognitive mapping in this sense is the metaphor for the processes of the political unconscious.

Film is a what he called a “conspiratorial text” with unconscious and collective effects that are concealed by bureaucratic impersonality of production and profit. But what is concealed? The particular fantasy that is projected by films must be collective and reassuring in order to contribute to a social totality. What occurs in postmodern film is Walter Benjamin’s allegory as articulated in his 1925 book, The Origin of German Tragic Drama or Origin of the German Mourning-Play (Ursprung des deutschen Trauerspiels). The goal of Benjamin’s analysis of Baroque drama in Germany was to find a theory for the Baroque which had always been castigated as a “fall” from the purity of Classical drama. As opposed to clear symbolism, Baroque drama presented allegory or an overabundance of symbols assembled from the ruins of Classicism. In the same way, Postmodernism pillaged the resources of a ruined and exhausted Modernism. This lack of an authentic time or historical period, this untimelessness of Postmodern time is called schizophrenia. As Jameson explained that,

..schizophrenic experience is an experience of isolated, disconnected, discontinuous material signifiers which fail to link up into a coherent sequence. The schizophrenic thus does not know personal identity in our sense, since our feeling of identity depends on our sense of the persistence of the “I” and the “me” over time. On the other hand, the schizophrenic will clearly have a far more intense experience of any given present of the world than we do, since our own present is always part of some larger set of projects which force us selectively to focus our perceptions.

Postmodern film and architecture was allegorized consumption of the past familiars that constructed an object-world composed of utopian wishes that allow the spectators to grasp their new (artificial and constructed) “being” in the world. Postmodern anxieties were soaked up at the movies and fantasy films became the solution that filled the cognitive and psychological vacuum. From what in this postmodern present were the audiences being distracted? Because traditional representation had become so tainted some form of representation had to be posited for the film audiences, raising the question of how would the present be represented? As an acknowledgement of the death of representation, the phenomenon of “Post” was a satisfactory solution to the problem, because allegory allowed random and isolated elements to function in fluid fashion and to form a schizoid constellation that was very Baroque, laden with plural and often entertaining feints towards “meaning.” In Postmodernism, new Post-generic films, therefore, were allegories of each other, abandoning the authenticity of the Modernist auteur.

Jameson considered that the Postmodern “time” was an extension of late modernism in which there has been a collapse of the distinction between the base and superstructure and film or cinema is representative of this third stage of capitalism, which is all-encompassing and global and inescapable. As he wrote in “Postmodernism, or the Cultural Logic of Late Capitalism,”

What we must now affirm is that it is precisely this whole extraordinarily demoralising and depressing original new global space which is the “moment of truth” of postmodernism. What has been called the postmodernist “sublime” is only the moment in which this content has become most explicit, has moved the closest to the surface of consciousness as a coherent new type of space in its own right – even though a certain figural concealment or disguise is still at work here, most notably in the high-tech thematics in which the new spatial content is still dramatised and articulated. Yet the earlier features of the postmodern which were enumerated above can all now be seen as themselves partial (yet constitutive) aspects of the same general spatial object.

Film is both a mode of production and an art form, a form of creation and a commodity—the difference is impossible to distinguish and therefore the “movies” are linked to never-ending attempts on the part of the dominant class to reinforce ideologies that reified human beings. Film in the Postmodern era could never be modern or new; it can only be allegorical, endlessly attached to a past that never was. Postmodern allegory was an expression of the inability of the human object (o longer a subject) to locate him or herself in time. Jameson posited that one must locate oneself in a space that had not one point of focus but was plural and is dispersed without hierarchal arrangement, what he considered a loss of perspective or a sense of place. No where is this loss of perspective, this inability to “map” better manifested than in the Bonaventure Hotel in downtown Los Angeles, a building that Jameson described in great and theoretical detail. Jameson “diagnosed” the Bonaventure, designed by John Portman in 1974 and completed in 1976, and while the building lacks the façade of quotations used by Charles Moore and Michael Graves, the hotel lent itself well to the concept of cognitive mapping. 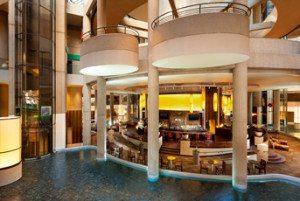 As anyone who lives in Los Angeles knows, the Bonaventure is located in one of the spaghetti bowls of intersecting freeways and surface streets, making arriving at the site quite a feat in itself. Jameson notes the three separate entrances to the building which is a visually confusing cluster of  five mirrored cylinders with the component parts visible only from the air. (Interestingly, Jameson himself miscounted the number of towers, stating that there are four.) Jameson wrote of the confusion for visitors who arrive at the hotel:

The entryways of the Bonaventure are, as its were, lateral and rather backdoor affairs: the gardens in the back admit you to the sixth floor of the towers, and even there you must walk down one flight to find the elevator by which you gain access to the lobby. Meanwhile, what one is still tempted to think of as the front entry on Figueroa, admits you, baggage and all, onto the second-story shopping balcony, from which you must take an escalator down to the main registration desk.

As if the entries and their presumed goals were not confusing enough, Jameson discussed the elevators which are both inside and outside, reflecting, so to speak, the mirrored surfaces of the buildings which attract and repeal the natural/cultural cityscape surrounding the hotel–outside become splashed onto the surface. According to the analysis of Jameson, the Bonadventue is all outside, all exterior, tight towers, clinging together into a conjoined unit, but the interior is subordinated to the allegorical ensemble of abstract shiny shapes. There is on focal point, no central level, the visitor is condemned to a futile wandering in search of a registration desk or a room down a rabbit warren of dark halls or rendered a passive onlooker from a vantage point that achieves no perspective and no horizon line. Without the old fashioned hierarchies of Modernist architecture, Postmodern architecture is playful and dysfunctional in its deconstruction of itself, mirroring, in a pun like fashion, the no-place of Late Capitalism. 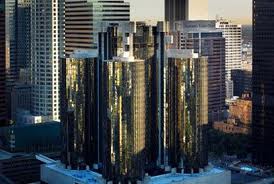