PAINTING IN THE ACADEMY
The Role of History Painting

The roots of academic art in France were long and deep and were integral to the tradition of painting in the École des Beaux-Arts, as well in as the provincial academies. In fact, within the art circles in France, classicism was considered almost a national characteristic, that in painting, was equated with the “grand manner” of Nicholas Poussin (1594-1665). For years the foremost authority on Poussin was the disgraced British spy and esteemed art historian, Anthony Blunt (1907-1983). In his authoritative book,  Art and Architecture in France, 1500-1700 (1953), Blunt explained the significance of Poussin:

By a curious freak, French painting of the seventeenth century produced its most remarkable and its most typical works not in Paris but in Rome, since it was in Rome that Poussin and Claude spent almost the whole of their active lives. In once sense these artists belong not to the French school but to that of Rome or the Mediterranean. Seen from another point of view, however, Poussin at least i stye key to the whole later evolution of French art. In him are summed up all the qualities traditionally associated with French classicism; and his influence was to be predominate in French art from his own time up to our own, in the sense that many artists took him as their idea, and an almost equal number rejected him with a violence which was in itself a tribute to his importance.

In his study of Poussin, Poussin’s Paintings: A Study in Art Historical Methodology (1993), David Carrier noted that the importance of Poussin to the French tradition was a long-standing trope in French art. While Blunt attempted to study Poussin in his own context, an earlier English art writer, Clive Bell also placed Poussin as the fountainhead. Bell, as Carrier pointed out, had other goals in mind, that is to present an analysis of Poussin’s art from a formalist perspective, making the point that the “classicism” of Poussin–the formal elements–connect the Baroque artist to Paul Cézanne. Carrier wrote that “Poussin, Blunt says, links French art to the High Renaissance and to the art of antiquity, providing the starting point for the tradition of Ingres and Picasso.” The formalist link down the centuries rests upon the grid which provides a framework for perspective and for composition. Cézanne retained the grid and eliminated the deep infinite perspective favored by the Baroque period. The Madonna of the Steps (1648) could not be more “classical” in its gridded underpinning of the rectangular support and the central placement of the figural triangle of the Holy Family. Seventeenth century classicism was characterized by this kind of  structured and logical composition, clearly defined forms, strong outlines and strong but restrained color of harmonizing blues and golds.

Nicholas Poussin. Madonna of the Steps (1648)

By the nineteenth century, responding to the experience with a more “authentic” classicism–actual murals for Pompeii and the Elgin Marbles–the space of Neoclassical painting was flattened and the figures were arranged in a more fontal and frieze like manner. Given the presence of authoritative sources, it should be no surprise that within the French art, classicism was always aligned with the academic system and was considered the artistic norm and the preferred style. As part of academic training, classicism was based upon a well worked out body of theory and system of instruction, which was based on the tenants of classical art. Classical art, antique art of ancient Greece and Rome, was a public art, made to communicate with the community and to express cultural values. Therefore it was important for the visual lessons to be clearly delineated and easily read, making classical art the ideal tool for a regime intent on disciplining its subjects. The values of classical art from antiquity was the basis of academic education and training, featuring perfected human forms, presented ideal states of being as conveyed by noble deeds and exemplary morality.

It is one of the ironies in history that in the midst of the Industrial Revolution, the most prestigious art form in France, history painting, rested upon antique classical art. The confluence between the ruling powers, the academy and classicism was summed up with alliance with le grand goût, or art in the grand manner, or le grand art acted out in history paintings. Usually large and imposing, demanding to be looked at, history paintings had the task of presenting didactic lessons, whether moral or patriotic, to the audiences. The exemplary scenes of high-minded behavior were preferably set in ancient times. Painters could translate the heroic nudity of antique statues, which were seen as universal and timeless, removed from specific time and place and from actual reality translated into pigment and presented as an entire narrative in a single dramatic image. The grandiosity of history paintings reflected the power of the state and the elevated beings in the government that ruled over the larger public. Compared to the local qualities of domestic topics, classicism did not concern itself with individual feeling or emotions but expressed states of emotions that were universal, signaled to the viewer through codified gestures, all of which were understood by the audience of the day.

Academic art was the product of an art school where training was based in drawing from plaster casts and, later, nude models. The carefully delineated forms were carefully modeled for a restrained three-dimensional effect that was rather like a bas relief on paper.  This academic art revolved around the mastery over the human form, which was considered to be the basis for the drawing all objects. Academic art was so grounded in the study of the human figure that the term “académies” refers to drawings and paintings of the live model, who posed in stereotypical postures considered “classical” and noble. Later these drawings would be replaced by photographs of modern nude men and women in “classical” poses, looking more then faintly ridiculous. The principle of teaching was to proceed from the part–the various figures–to the whole–the sparsely scenic backdrop. The figures (parts) would then be grouped into an ensemble stretched across the canvas, gesticulating in frozen positions. This method of collecting model studies and their organization would lead to canvases crowded with actors striking a variety of glorious poses in a painted theater, rarely relating to one another. 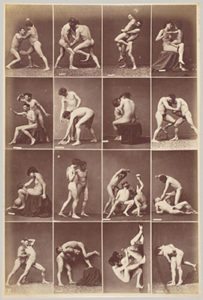 Towards the end of the dominance academic art in France, composition became an exercise in adding bodies striking standard studio poses to a grid foundation, as best seen in Thomas Couture’s Romans of the Decadence (1850). The highest form of art resulted from the study of the human forms displayed in large-scale history painting, depicting noble and uplifting morality plays from the past. However, the ambitious artist who mastered the requirements was rewarded for following the instructions of the Academy. The Prix de Rome could be won when a student (males only) showed his  ability to conceive of a composition on a subject from the Bible or ancient mythology or classical literature or national history as dictated by members of the Academy. This proscribed topic, designed to reinforce the state, gave the student a chance to use academic poses and to render historical costumes, draperies and folds of cloth, and a variety of colorful accessories, showing the mastery of human anatomy and use of carefully drawn detail–all designed to display the virtuosity of the artist. The students learned of ideal forms that appealed to the mind and the intellect rather than to the emotions and the senses, an ideal that conveyed a universal truthfulness and a timeless authenticity. 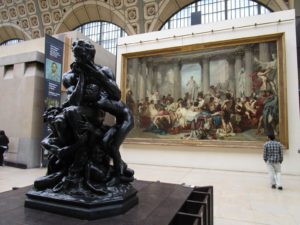 Romans of the Decadence in the Musée d’Orsay

Color was applied in strong but somber tones and was used to reinforce the linear zones and the overall design. This conservative handling of color was accompanied by fini, the smoothly finished pictorial surface (facture) that required great skill. The careful drawing, smooth surface of classicism in the Academy stood for an intellectual structure, a system of order, imposed upon nature in order to rule and control it. Traditionally color was always secondary to form and composition and color was used in the service of the narrative rather than for its own’s sake. But as the nineteenth century progressed, color moved into a more primary role, not just in painting itself but also in the intellectual quarrel over subject matter and the place of emotions in art. At the hands of some artists, color was linked to the increasing importance of contemporary content, a new kind of history painting. Presenting current events, rather than safely distant events, was a political event, capable of challenging the perceived power of the status quo. For decades the Academy would be embroiled in a quarrel between the Ancients and the Moderns.

Indeed, by the second decade of the nineteenth century, the Academy and its official style was challenged by a new generation of restless artists. The threat to classicism came from many directions. First, there was the breakdown of the standards of hierarchies of subjects due to the new audiences and patrons, who rather liked landscape painting and enjoyed genre scenes.  Second, the works of artists who insisted on disregarding the rules of classical art-making by reveling in brilliant color and dynamic spectacular compositions. In an outbreak of the old Poussin vs. Rubens debate, the young Romantic artists, such as Eugène Delacroix,  preferred color over line and were interested in natural and transient light and preferred exotic and decidedly un-classical subjects. It should be noted that while Neoclassicism was obviously an art of sculpture, Romanticism is essentially an art of painting, and, before 1863, painting was not taught at the Academy.

Uninterested in classical composition, painters such as Édouard Manet, also paid little attention to the carefully worked out method of half-tones, demi-teints and to the prized finish of academic art. Manet, in his own time, was accused of painting and drawing carelessly and the odd flatness of his figures aroused the ire of critics. Although Manet was academically trained, by mid-century, artists trained outside of the Academy, like Gustave Courbet, could become successful and prominent. In the clash between the Romantics and the Classicists, Courbet’s bourgeois realism and naturalism was a compromise between the polarities of line and color.  Perhaps it is no coincidence that vanguard art developed in sub-genres neglected by the Academy. Here in pure landscapes, still lives and genre scenes, Realism and Impressionism could experiment in a territory that was virtually unoccupied by academic artists. While the Academy stubbornly upheld unyielding theoretical positions and meaningless antique art in modern times, the official painters, by incorporating watered-down innovations in painting, were able to bring about a quiet revolution in pictorial techniques and content, updating history painting long after the classical transition had faded into oblivion.

If you have found this material useful,