The Romantic era was Janus-faced, facing the present and commenting upon it while turning away for current events in order to yield to the lure of fantasy, legend, myth, and exoticism.  On one hand, Antoine-Jean Gros (1771-1835) called attention to the human costs of Napoléon’s brutal wars in Napléon at Eylau in his blunt painting of 1807, and, on the other hand, Jean-Auguste Dominique Ingres (1780-1867) retreated into Nordic myth in his Dream of Ossian of 1813 and his charming small genre paintings of troubadour legends. And Anne-Louis Girodet Roussy-Trisson (1767-1824) produced a reverie of eroticism with his Sleep of Endymion in 1791 as the opening volley of Romanticism, while Théodore Géricault (1791-1824) explored the limits of Romanticism with his portraits of insane people and his renditions of severed limbs. One did not have to be an avant-garde artist to be “Romantic,” for the avant-garde was just beginning to form in the seedy neighborhoods of Bohemian Paris. One did not have to challenge Academic standards to be Romantic, for the Academy could very well accommodate exciting contemporary narratives, as long as they were correctly painted or sculpted. Although associated with bold color and visible brushstrokes, Romanticism was not a style, nor was it a particular content, nor was it a rebellion against authority. The successful and celebrated Romantic artists wanted to be accepted by the academic powers and vied for position and honors within the Salons. For many of these artists, their reputation as “romantic rebels” rests upon a few works of art.   Most of the Romantic artists were part of the establishment and did not live the life of an outsider artist, unappreciated and scorned by the forces of the status quo.

The myth of the Romantic artist has been entangled anachronistically with that of the avant-garde, and it should be noted that the full-blown avant-garde movements of Realism and Impressionism were decades away. The so-called rebelliousness of the Romantic artists was less political than entrepreneurial, linked more directly to the loss of traditional patrons: church, state, and aristocrats. The Romantic artist acted as an opportunist or a performance artist who sought to both slide past the conservative jury of the Salon and also to shock the spectators with spectacular and entertaining art. The art audience had become more and more middle class and attended the Salons in large numbers. The bourgeoisie, the crowd, the mob had be addressed in some manner, preferably in a way that would bring success. Fueled by fashions, literature and restless aggressive politics, the public developed a taste for scenes of sex and violence provided by Eugène Delacroix (1798-1865) and unsanctioned by the Academy. The art audiences swooned over the newly discovered beauties of Nature in the paintings of the Barbizon artists. The spectator had little interest in the erudite academic subject matter favored by history painting and gravitated towards the familiar and the contemporary. The independent art market for genre painting and landscape painting began to develop, inspiring artists to concentrate their efforts in these areas that were not supported by the academic hierarchy and where there were opening new professional territories for ambitious artists out of favor with the Academy. 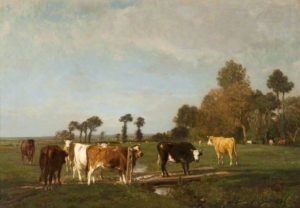 Landscape painting began to free itself from its traditional role as a backdrop for a narrative placed in the foreground, as seen in the works of Claude Lorrain (1600-1682), and “pure” landscapes of Constant Tryon (1810-1865), painted for the sheer pleasure of nature’s beauties and free of moralizing, became more and more popular with the art patrons. Like still lives, landscapes could fit into any home and were acceptable to any taste, and did not offend any political opinions. The so-called lower genres were directed not so much towards the academy but to a newly enriched public that was inclined to buy decorative art. The most important group of landscape painters was the Barbizon School, located in the village of Barbizon in the Forest of Fountainebleau. Artists such as Theodore Rousseau (1812-1867) and Narcisse (Virgile) Diaz (de la Peña) (1807-1876) sketched the tree filled vistas in situ but finished the paintings in their studios. They shared, along with many Romantic painters, a new concern for direct observation of Nature at its most natural and most accurate as seen in the ordinary sites favored by the English artist John Constable (1776-1837). 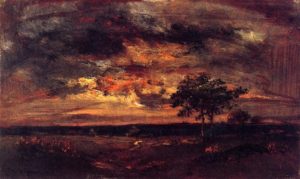 The Barbizon artists followed the Claudian precepts of the “beautiful” but they were distinctly modern in their refusal to include narrative in the painting.  At the other end of the spectrum from marketable landscapes, lay the public taste for the strange and the exotic, also linked to economics. Due to the colonial dreams of France which was expanding its fledgling empire into the Middle East, the “Orient,” the “East” from the Holy Land to north Africa, became open territory to be subdued and conquered by the Western Europeans who were beginning another phase of unchecked imperialism. The delight in the themes of sex and violence played out in the land of the Other, as  imagined by the European male to be part and parcel of the Middle East, was fueled as much by masculine sexual desires and forbidden fantasies as by imperial pride. A large number of artists, called “Orientalists” imagined the mysterious East as a place of harems and beheadings, inhabited by an alien and violent people who could only benefit from benevolent French rule. Orientalism in French painting was popular with the crowds for decades. Horace Vernet entertained his French audience with the savagery of  The Lion Hunt (1836) that fueled European feelings of superiority. Théodore Chassériau’s Reclining Odalisque (1853) flirted with sort core pornography and shamelessly unveiled the mental landscapes of the European males. 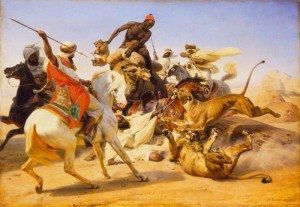 Although the aristocrats, old and new, were restored to power during Napoléon’s rule, after the Restoration of Louis XVIII, the new audience for art was largely middle class.  The Romantic artist was sundered from traditional conservative artistic styles, separated from traditional patronage, and stripped of the historical social role as servant to higher powers. From the fall of Napoléon on, the artist was forced to re-invent him/herself as a social being and was forced to re-create a new cultural place and new purpose for unsanctioned art. By the end of the Romantic period, the imported German idea of “art-for-art’s-sake” had fulfilled multiple purposes, providing art and the artist with a new and exalted role in society. The artist had to be a free and independent creator who was an innovator and pushed art to change. As the new aesthetic theories gained a following, the art world began to splint between the avant-garde who rebelled against outmoded strictures and displeased the public and the academics who conformed and pleased the audience. By 1835, the writer and art critic, Théophile Gautier (1811-1872) attacked conventional critics for their adherence to ideas of decorum and good taste. In the preface to Madamoiselle de Maupin (1835), Gautier advocated for beauty and art for their own sakes and disparaged all that was useful:

What is the good of music ? of painting ? Who would be foolish enough to prefer Mozart to Monsieur Carrel, and Michael Angelo to the inventor of white mustard ? There is nothing truly beautiful but that which can never be of any use whatsoever ; everything useful is ugly, for it is the expression of some need, and man’s needs are ignoble and disgusting like his own poor and infirm nature. The most useful place in a house is the water-closet.

For the artist to be free to express original and personal feelings, art should have no useful purpose. Gautier was echoing Kant’s phrase that the purpose of art was its “purposive purposelessness.” Although these ideas give new impetus to art and a new place in society to the artist, the idea that art should exist without thought to the art audience also begin the separation between the artist and the public that will be accelerated by the Revolution of 1848 in France. As seen in the literary and the visual arts, Romanticism was an international movement and a cultural rejection of the Enlightenment and its stress on objective reason and rational thinking. Although each nation had its own version of Romanticism, in general, Romanticism was subjective and the ultimate truth was individual emotions, feelings, and expression. This shift from the objective to the subjective, from object to subject, or the individual, as the source of truth was a radical transformation in Western thought, perhaps the logical consequence of Protestant emphasis on individuality and European hopes for a political democracy. The artist became important to society in a new way: not as an explicator of moral ideals, but as a “genius,” a seer who brought, through art, new insights into life.  As Emmanuel Kant wrote in the Critique of Judgment (1790)

..it may be seen that genius properly consists in the happy relation, which science cannot teach nor industry learn, enabling one to find out ideas for a given concept, and, besides, to hit upon the expression for them-the expression by means of which the subjective mental condition induced by the ideas as the concomitant of a concept may be communicated to others. This latter talent is properly that which is termed soul.

Although a new (Kantian) critical vocabulary was created as the new philosophical branch of aesthetics moved to the center as artistic concern, the Romantic artists offered no coherent programme nor did they have a common goal.  Wrapped up in their sense of individuality, artists produced works of art that proclaimed individual personalities and the originality that was the prerogative of the genius. Drawing and low key color, disciplined stylistics, and a smooth “licked” surface in painting and sculpture, characteristic of Neoclassicism became politically tied to the state. Color, rough painting or impastoed facture became politically tied to the emotions that might lead to unrestrained social behavior or political unrest. Romanticism, as a challenge to academicism, was associated with forces of disorder and anarchy and revolution. In France, a nation that experienced periodic revolutions and uprisings, teetered from monarch to republic and back to monarchy, political dissent was a danger to order. Some Romantic artists such as Delacroix and Géricault produced deliberately provocative works. Géricault’s Raft of the Medusa (Salon of 1819) recounted an embarrassing and tragic episode of government incompetency. Delacroix’s Liberty Leading the People (1830) was considered so dangerous that the inspiring painting was purchased by the government only to be put in storage for the next thirty years. Politics aside, most so-called Romantic artists, such as Delacroix, were actually politically quiet conservative, as are most artists because social and political stability are necessary for art making to be possible.

If you have found this material useful,