Jacques Derrida and the Center

It should never be presumed that Jacques Derrida (1930-2004) attempted to solve problems or to promote new solutions. His mission as a philosopher was quite different: Derrida was a Deconstructor or a close reader of modern philosophy from Rousseau to Kant to Marx to Freud to Saussure to Freud to Husserl to Lacan and so on–a nearly clean sweep that included Nietzsche and Hegel and Heidegger–very little was beyond his inquisitive reach. Derrida located the end of classical philosophy in the philosophy of Husserl whose phenomenological tradition was a source of thought from Heidegger, Sartre, de Beauvoir and Merleu-Ponty, all of whom took their departure from the East European philosopher. Rather than extending or commenting upon the philosophy of others, Derrida responded with a form of discourse that was not philosophy but a critique of philosophy, not in terms of its content but in terms of language itself. The difference between his approach to philosophy as a philosopher is rather like the distinction between literary analysis, such as close reading with an eye to interpretation, and a linguistic analysis with an eye to “shaking”the structure. As Derrida explained in “Force and Signification,”

Structure then can be methodically  threatened in order to be comprehended more clearly and to reveal not only its supports but also that secret place in which it is neither construction nor ruin but   lability. This operation is called (from the Latin) soliciting . In other words, shaking  in a way related to the whole  (from sollus , in archaic Latin “the whole,” and from citare , “to put in motion”). The structuralist solicitude and solicitation give themselves only the illusion of technical liberty when they become methodical. In truth, they reproduce, in the register of method, a solicitude and solicitation of Being, a historicometaphysical threatening of foundations.

It is with Derrida’s writings from the late 1960s that philosophy become rather hybrid and bifurcates into the interpretation of philosophy and “theory,” meaning that with Derrida, the era of Post-Structuralism or Post-Modernism begins. “Theory” is writing about writing and critiquing philosophy as a work of writing or as literature and thus straddles the distance between philosophy and literary theory, using linguistics and Structuralism as intermediaries. Previously, as Derrida noted, philosophy established its now unique territory by naming itself and by  defining its own margins and drawing its own borders as a separate and impenetrable entity. In order to hide the fact that philosophy is writing with no particular claims to the truth while at the same time claiming truth as its goal, philosophy, from Plato to present, constantly builds and rebuilds its own foundation(alism) to contain its own logical fissures within. Derrida’s project is to question these “foundations’ of philosophy or to be more precise the very grounds of philosophical practice by seeking and finding these gaps, crevices and cracks papered over by confident rhetoric. The critique of the texts reveal arbitrary literary devices which perform exclusionary tasks which allows the foundation to maneuver or to shift without aggravating the instabilities.  As long as the traditional center remains preserved, it can govern the surrounding structure. 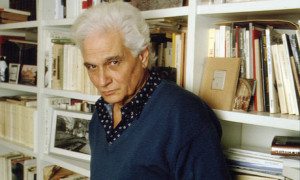 Derrida “shakes” the structure of structuralism by pointing out that the “structure” is a figural metaphor that contains meaning, in other words meaning is contained and controlled within a structure which has meaning in and of itself. But the center of the meaningful structure holds only as long as it is not visible and paradoxically must remain outside the structure, in the sense that the center exists, must exist, but must also denied, hidden. Oddly the center is within the structure but escapes structurally itself in its condition of being hidden. In “Force and Signification,” Derrida described the structure as a “concrete totality.” The design of the structure appears more clearly when the content or meaning is neutralized and the structure is reduced to a skeleton. But as he explained, the structure is haunted by the memory of “meaning and culture” and this state of being haunted presents a return to nature. The structural consciousness, or the (self) consciousness of what has been repressed, is a “catastrophic consciousness.” Derrida explained the concept rather poetically,

Thus, the relief and design of structures appears more clearly when content, which is the living energy of meaning, is neutralized. Somewhat like the architecture of an uninhabited or deserted city, reduced to its skeleton by some catastrophe of nature or art. A city no longer inhabited, not simply left behind, but haunted by meaning and culture. This state of being haunted, which keeps the city from returning to nature, is perhaps the general mode of the presence or absence of the thing itself in pure language. The pure language that would be housed in pure literature, the object of pure literary criticism. Thus it is in no way paradoxical that the structuralist consciousness is a catastrophic consciousness, simultaneously destroyed and destructive, destructuring , as is all consciousness, or at least the moment of decadence, which is the period proper to all movement of consciousness. Structure is perceived through the incidence of menace, at the moment when imminent danger concentrates our vision on the keystone of an institution, the stone which encapsulates both the possibility and the fragility of its existence.

The Center is a significant linchpin to philosophy for not only does it maintain the shape of the frame it also contains (secrets) the (hidden) assumption of presence or logos. Logos is vitally important to philosophy because it guards the “truth” that the structure is now capable of generating. As a figure or metaphor, the structure is given a center, or a point of presence, a fixed origin. Naturally Derrida find issues with the notion of the “figure” that is kept hidden within the texts. The function of the center, philosophy’s most present figure, is to orient, to balance, and to organize the structure, making it stable. The organizing principle of the structure is to limit the play inside the form and to close off play so that the substitution of contents, elements, or terms is no longer possible.  But, as Derrida pointed out the center is no the center, for the idea of the centered structure is just that an idea and a metaphysical one at that. The function of the imaginary center is to express a desire, a longing and a reassuring certitude that even the greatest philosophers fall victim to. The structure becomes an object itself, literally a thing itself that guarantees a unity of form and meaning, is conceived on the basis of a (imaginary) full presence, which is beyond play, guaranteeing unity within the structure.

Although de-centering was pre-figured in Nietzsche in his critique of metaphysics, in Freud’s critique of self-presence, and in Heidegger’s destruction of metaphysics–of Being as Presence–but Derrida declared they are all trapped in a circle. The metaphysics of presence can be “shaken” by the concept of a sign, understood as a “sign-of,” or a displacement, a stand in for that which is absent. The concept of the sign, as Derrida has made clear, is determined by opposition to another sign which is always embedded, hidden within, haunts, the sign itself.   If one understands that the structure is a “Sign” that is understood in terms of its opposition, a non-structure or an open-ness without boundaries.  Derrida’s operation is to search for issues in philosophy that which is hidden, forbidden, or repressed, because it is these repressed problems that haunt philosophy. (Irigaray made the same observation when she asserted that the patriarchy rests upon the body of the murdered Mother who haunts the Father.) Derrida still seeks within the writing of philosophy that which must hide (from philosophy itself) in order for the discourse to remain “philosophy” or a discourse that transcend “writing” or “literature.”

In questioning “presence,” Derrida questioned the entire idea of the “subject.”  If the human subject is abandoned, then there must be a shift from subject to text, in which subjects are constructed through language, an ultimate de-centering. If this is the case, for Derrida, there are only interpretations or perspectives and no final conclusions because signs are interdependent. Therefore, we are unable to escape the constraints of language, which constructs us and constructs our unconscious and there is no alternative but to operate as non-subjects within language. Impacted by his experience of May 1968, Derrida often wrote in intense terms and he was inspired by the philosophy of Nietzsche, who thought of this figurative drive, the desire to create a “figure” is the will to truth which is always the will to power. The drive for knowledge is linked to the desire to contain writing within a structure which is also is the drive to appropriate and conquer. There is incessant figuration in the unconscious. In “Force and Signification,” (note the word “Force”) Derrida dealt with the structural analysis of Jean Roussert, one of Structuralism’s leading figures in literary theory, who had written “Forme et signification. Essais sur les structures litteraires de Corneille a Claudel” in 1962. While Derrida was not challenging Rousset as he did Claude Lévi-Strauss, he commented,

Structure is then the unity of a form and a meaning. It is true that in some places the form of the work, or the form as the work, is treated as if  it had no origin, as if, again, in the masterpiece—and Rousset is interested only in masterpieces—the wellbeing of the work was without history. Without an intrinsic history. It is here that structuralism seems quite vulnerable..

The problem, simply stated that the concepts of both structure and center are figurative. Derrida agreed with this perspective that all language is metaphorical, working by means of tropes and visual, and thus literary “figures” to be “seen,” meaning that there is no clear distinction between philosophy and literature. A trope, from the Greek “topos” means a turn, a way, a manner, is the expressive use of a word or a figure of speech, or a word or a phrase that is an embellishment. Linguistically a metaphor in language does not reflect reality but constitutes it through substitution and, thus  is rooted in speech alone. Language, then, works by a transference of reality to sign, a process by which all meaning shifts, and this disorderly metaphorical transference is a threat to orderly language and results in a proliferation of meaning that has no origin and no end point. Derrida referred to the structure, therefore as a “literary thing.” He continued,

..the notion of structure refers only to space, geometric or morphological space, the order of forms and sites. Structure is first the structure of an organic or artificial work, the internal unity of an assemblage, a construction; a work is governed by a unifying principle, the architecture  that is built and made visible in a location.

Structuralism has as its goal the concept of totality in order to retain coherence. The structure is an agent of prohibition: it hides or ignores all that is incomplete or missing or accidental, its role is to organize meaning and the completion of a totality. The structure acquires meaning by anticipating the telos, a goal, a direction. This resulting enclosure is a force. As Derrida wrote, “Force is the other of language without which language would not be what it is.”