Jean-François Lyotard and the Sublime, Part One

Lessons on the Analytic of the Sublime (1991)

The way in which the mind of Jean-François Lyotard worked was slow and systematic and thorough. The notion of the potential injustice in language games appeared in The Postmodern Condition: A Report on Knowledge (1979) and was fully explored and applied to the Holocaust in The Differend (1983) where Lyotard brought up the Emmanuel Kant’s discussion of the sublime in the Critique of Judgment (1790). Although almost two decades separate these two books, and Lyotard’s Lessons on the Analytic of the Sublime continued a discussion on Kantian aesthetics that would culminate in a protracted encounter with the sublime in the avant-garde which played out in his late works. It is this culmination of the sublime into the avant-garde that has most interested contemporary writers who tend to avoid the more difficult work of 1991 in preference for the occasions where Lyotard wrote more directly of specific works of art. But, like most of Lyotard’s work, this book on the sublime has a long gestation.

Lessons on the Analytic of the Sublime was proceeded by several earlier books and by shattering political events that cast a shadow over much of Lyotard’s writing through the 1980s. The uprising of May 1968 seemed so significant at the time but, in retrospect, it is the aftermath of failure and a return to the “normalcy” of rule by Charles de Gaulle and the reactionary 198s0s that would inform Lyotard during that decade. Against this backdrop, the philosopher Jean-Luc Nancy held a seminar at the École Normale Supérieure (ENS) in Paris and Lyotard, post his work on the “Postmodern Condition,” gave a paper called “Enthusiasm” in 1981 * and entered into his mature phrase. Post-Freud and post-Marx and post-May 1968 this short paper by Lyotard returned to Kant who attempted to interpret the ongoing French Revolution and the wave of feeling that swelled and filled Europe with a sense of political change and hope for the future as free people. Kant’s meditation on the “enthusiasm” that surrounded the Revolution was embedded in a small section in the Critique of Judgment, his chapter on the Analytic of the Sublime; and it is with this detail that Lyotard picks up a political discussion that led him to The Differend, which led him to Lessons on the Analytic of the Sublime.

The intellectual journey of Lyotard to philosophy was a political one. In the beginning of Peregrinations. Law, Form, Event (1988), he explained witty that, due to his early marriage and fatherhood, becoming a monk was impossible, his next choice of vocation, art, was rendered moot due to “lack of talent,” and, finally, his desire to be a historian was thwarted by a weak memory. Philosophy was his last choice, and Lyotard spent years as a civil servant teaching high school students in France, but he gave up all but political writing in the service of the forthcoming Marxist revolution. In a way, it was the collapse of the “Days of May” that sealed the fate of Lyotard to evolve into a philosopher who sough a way to reenter politics without being (too overtly) political. The  Critique of Judgment was a far more political document than the  Critique of Practical Reason within Kant’s oeuvre, but his thoughts on politics never resolved themselves into a fourth book on, say Political Reason. On one level what Lyotard was attempting to do was to write a Kantian fourth critique, a political one in which political theory was elevated to the level of a philosophical critique. The former road for political critique, Marxism, seemed less clear, but Kantian thinking provided a higher ground from which to consider politics.

It is very Lyotardian to prepare the way to a new work over a period of years, moving from one territory to the other, and it was this 1991 excursion into the dusty and neglected topic of the sublime (and the beautiful) that shook aesthetics out of its formalist slumber. The problems Lyotard faced in returning to Kant were extensive, for fully two centuries had passed since the 18th century philosopher attempted to synthesize and surpass the earlier tentative writings on aesthetics. The 20th century philosopher re-entered Kant through the path of the “event.” The event of his century was, for Lyotard, the Holocaust, the event that stopped history and forced subsequent “history” to be written in a different fashion. The event of his century was, for Kant, the French Revolution. What connects these two “events” was that both were apocalyptical–both ended in disaster–and neither was witnessed nor experienced by the philosophers. However, what pulls the events apart was the fact that the French Revolution was a deliberate spectacle with thousands of witnesses and the Holocaust produced, not witnesses, as Lyotard asserted, but victims and perpetuators, both equally silent. 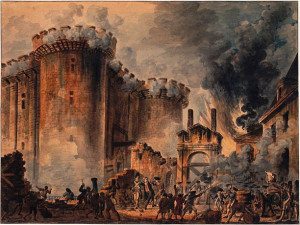 Lyotard explained the Kantian concept of the Event, which is a “sign of history,” residing as part of but beyond the narrative of history, by writing

Kant’s event, Lyotard reported in Le Differend, was not a “momentous deed” or a revolution. The event, Kant asserted

“..is simply the mode of thinking (Denksugnsart) of the spectators (Zuschauer)  which betrays itself (such verrät) publicly (öffentlich) in this game of great upheavals (Umwandlungen, such as revolutions), and manifest switch a universal, yet disinterested sympathy (Teilnehmung) for the players on one side against those on the other..Owing to its universality, this mode of thinking demonstrates (beweist) a character of he human race at large and all at once, and owing to its disinterestedness, a moral (moralisch) character of humanity, at least in its predisposition (Anlage), a character which not only permits people to hope for progress toward the better, but is already itself progress insofar as its capacity is sufficient for the present.

Despite the disasters of the Terror and the Final Solution, these Events started the Modern and the Postmodern respectively. The French Revolution gave rise, despite the bloodbaths and rolling heads in city squares, to the Modern era and both responded to and gave rise to modern philosophy, while the Holocaust brought all the hopeful optimism of modernity crashing down. In a general sense, in Lyotard’s différend, the Holocaust is sublime because it defied comprehension, but he continued  his discussion of the sublime in The Differend through the avenue of “enthusiasm” or Kant’s way of trying to understand the “feeling” of the French Revolution. The odd word, “enthusiasm,” was intended to connote the sense of being caught up in an “event” that was stronger than any one human being who might be swept up in the hope of the Revolution. Notably, Kant wrote the Third Critique years before the Terror broke out, so this sublime feeling of an enthusiastic response to the spontaneous outbreak of proletariat rebellion, like May 1868, utterly failed when Napoléon became Emperor. In his extended discussion of Kant in this book, Lyotard wrote that

Enthusiasm is a modality of the feeling of the sublime. The imagination tries to supply a direct, sensible presentation for an Idea of reason (for the whole is an object of an Idea, as for example, in the whole of practical, reasonable beings). It does not succeed and it thereby feels its impotence, but at the same time, it discovers its destination, which is to bring itself into harmony with the Ideas of reason through an appropriate presentation.

Kant’s Third Critique attempted to deal with judgment over human conditions and situations that defied reason and involved the domain of feelings, or what we today could call psychology, but which cannot be reduced to personal reactions and must be brought into the realm of universal judgment. This in-between zone, between the pure and the practical, needed its own critique in which Kant sought to investigate the grounds for judgment where the elements are indeterminate. There are certain objects (art) that give rise to feelings of pleasure, but there are experiences that give rise to displeasure, a level of displeasure that,when it exceeds the pleasure of agreeable beauty, is called the “sublime.” In the typical Modernist fashion, there is a structured binary, suggesting that the beautiful and the sublime can be contrasted along the lines of pleasure/displeasure or weak/strong and so on, but Lyotard seized upon a small part of the Critique, the Analytic of the Sublime and, within that section, one concept “enthusiasm.”

The feeling of enthusiasm was, par excellence, the experience of the sublime, sublime because the feeling could not be presented. The inability to present is related to the fundamental incompatibilities within the sublime itself, a clash between an intensity of pleasure that becomes pain. Enthusiasm is a knife edge sensation that teeters on the verge of what Kant called “dementia” or a kind of insanity, hence his odd insistence on disinterested sympathy, as a bulwark against a fall into madness, which is exactly what happened in France during the Terror. Despite the excesses of the French Revolution, the spectacle of the Fall of the Bastille, the drama of the Oath of the Tennis Court and the promise of the Declaration of the Rights of Man excited the imagination of those level-headed (disinterested) enough to see to the future. In other words, the Event of the French Revolution was  less as sequential (and predictable) series of occurrences and more of a Begebenheit or a “sign of history” “delivering itself.” This is the sublime, Lyotard explained,

Great changes, like the French Revolution, are not, in principle, sublime, by themselves..the sublime is best determined by the indeterminate..The Begebenheit which ought to make a sign of history could be found only on the side of the audience watching he spectacle of the upheavals..The spectators, placed on other national stages, which make up the theater hall for the spectacle and where absolutism generally reigns, cannot on the contrary, be suspected of having empirical interests in making their sympathies public (öffentlich), they even run the risk of suffering repression at the hands of their governments..The Teilnehmung through desire is not a participation in the act. But it is worth more, because the feeling of the sublime, for its sake, is in fact spread out onto all national stages.

Closely related to the Differend, then, is the Sublime, a topic which Lyotard continued in Lessons on the Analytic of the Sublime, which will be further discussed in the next post.

*Published as Enthusiasm. The Kantian Critique of History by Stanford University in 2009.