Lessons on the Analytic of the Sublime

In Ticket to a New Decor, Jean-François Lyotard wrote of “anamesis,” a key concept in his account of the sublime. In the Platonic sense, anamesis is a form of pre-conscious collective memory that must be recovered through an act of conscious learning. Anamesis is a precondition for learning in the sense that there are certain innate ideas or internal concepts that are already present in the mind at birth. Kantian thought reconsidered these preexisting conditions as already-present conitive structures that make the instinctive understanding of certain concepts, such as “cause and effect” without having to re-experience or relearn on each occurrence that every effect has a cause. Because, as was pointed out in the past post, the Sublime is beyond the bounds of “normal” understanding and must be accounted for in another fashion,  Lyotard applied anamesis to the Sublime stating,

All these wounds can be given names. Their names are strewn across the field of our unconscious like so many secret obstacles to the quiet perpetuation of the “modern project.” Under the pretense of safeguarding that project, the men and women of my generation in Germany imposed on their children a forty-year silence about the “Nazi interlude.” This interdiction against remembering stands as a symbol for the entire Western world. But can there be progress without remembering, without an act of anamnesis? Anamnesis constitutes a painful process of working through, a work of mourning for the conflicting emotions, loves and terrors, associated with these wounds.

Anamesis, then, is a form of recollection but, in the Lyotardian sense, it becomes a collective buried memory that resists being unearthed. Indeed Lyotard took the concept of the différend from his earlier book, The Differend, Phrases in Dispute (1983), and applied the idea to the sublime, suggesting a refusal or an inability for “phrases” to communicate with each other. In some ways, Lyotard solved a problem that Kant struggled with of how to fit the Sublime into his architectonic structure of Judgment and, in the end, as Lyotard pointed out, tacked his “analytic” of the Sublime to the larger book as an “appendix.” The Sublime is that human condition that refused to fit into Kant’s neat scheme that would allow it to parallel the Beautiful as an opposite pair. But there is a différend the prevents the Sublime from falling into Kantian place and due to irreconcilable differences, the Sublime dangles at the edge of Judgment as an appendix.

The Sublime is beyond defining in the positive sense of saying “this is what it is” and is (not)defined in its mute disability to present itself. Emmanuel Kant discussed the Sublime in terms of pure and present feeling, not discourse, but emotions that descend upon the body. It is not often noted, but the Sublime, as a feeling, is physical and sensual–breathlessness and speechlessness–as Kant noted,

The sublime moves; the expression of a person experiencing the full sense of the sublime is serious, at times rigid and amazed. On the other hand, the vivid sense of the beautiful reveals itself in the shining gaiety of the eyes, by smiling and even by noisy enjoyment. The sublime, in turn, is at times accompanied by some terror or melancholia, in some cases merely by quiet admiration and in still others by the beauty which is spread over a sublime place. The first I want to call the terrible sublime, the second the noble, and the third the magnificent. Deep loneliness is sublime, but in a terrifying way.

The Beautiful and the Sublime can be paired, but only to a certain extent. Both share the fact that both are feelings that must be expressed as judgments, both must lack and “interest” or private/individual concerns and therefore both must be universal. Although these judgments, being universal, are shared by the collective, these feelings are singular and are subjective. Both judgments also deploy the faculties of reason and understanding. So the judgments of the Beautiful and the Sublime are “pure” aesthetic concepts in that the beholder is “disinterested” but it is also impossible to point to any determinative reason for the judgment. Deciding upon what is Beautiful or Sublime is cannot be decided with finality because the concepts to which they refer are indeterminate, or without any finality. In writing to the confrontation with the Infinite, Lyotard stated,

Before this Idea, the dizziness of the thought that presents is transformed into a moral anguish. The imagination sinks to a zero of presentation,w which is the correlate of the absolute infinite. Nature founders with it, for nothing of it is presentable as an object of this idea.

Most aestheticians write more easily and more copiously of the Beautiful because the Sublime is so very divergent and escapes scholarly expression. The Beautiful is based securely within form and that form has limits, a shape and boundaries. The Beautiful, whether it is a beautiful woman, as imagined by Edmund Burke in Philosophical Enquiry into the Origin of our Ideas of the Sublime and Beautiful (1757), or a beautiful flower is always possible to understand. Because the beautiful form can be presented or represented, the viewer receives pleasure at the sight of something called “quality.” Of course the Beautiful is not necessarily connected to an object but, necessary to the concept of the beautiful, is its availability to understanding and to form and to pleasure. 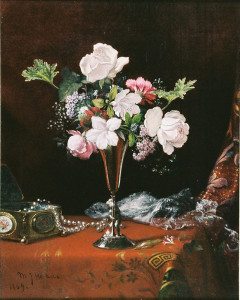 Martin Johnson Heade, Mixed Flowers with a Box and Pearls (1869)

The Sublime, on the other hand, is unavailable: unavailable for limitation because one of its characteristics is its immense quantity, unavailable for the rules and order that guide beauty. When the Sublime occurs, it cannot be presented and it cannot be represented.  As the result, the Sublime is unavailable for understanding and, therefore, belongs to the realm of reason. This is where the différend enters. When confronted with the Sublime, Reason demands satisfaction but satisfaction is unavailable because the Imagination, which is expected to be able to provide content for Reason, fails. Communication breaks down between the former allies: reason and imagination. The lack of or the impossibility of agreement or cooperation results in sharp feelings, not of pleasure and satisfaction, but of distinct displeasure. As Lyotard wrote,

This differend is to be found a the heart of sublime feeling at the encounter of the two “absolutes” equally “present” to thought, the absolute whole when it conceives, the absolutely measured when it presents..Their wing put into relation abolishes each of them as absolute..the conflict is not an ordinary dispute, which a third instance could grasp and put an end to, but a “differend.”

Above all else, the Sublime is Negative, it always eludes reason, imagination and understanding. The Sublime is on the wrong side of pleasure but in its very novelty or rarity, this overwhelming feeling fascinates some philosophers precisely because of its abject state for formlessness. This awakening interest in the Sublime is new, fueled undoubtedly by certain “sublime” events, such as the discovery of the concentrations camps and mass industrialized death and the dropping of two atomic bombs upon cities of civilians, and, more recently, September 11th. Lyotard, however, moved past actual events in Lessons on the Analytic of the Sublime, and, in his later essays on avant-garde art, concentrated on one of his earlier passions, the visual arts. Indeed, many post-war artists have attempted to explore the Sublime but there is a real question (in my mind) whether the Sublime can possibly be “contained” within the boundaries of a work of art.

In the true Sublime, a very rare encounter, there is a suggestion of (the mind) being outside, of being a spectator watching or experiencing something over which one has no control or understanding. The Sublime, oddly enough, has not been applied to, for example, those who survived the Dresden bombing–those who were immersed in the event. For one who has experienced a Sublime event, feelings of fear and relief at having survived would dominate. But the outsider would view the Sublime experience with a mix of negative pleasure in that s/he is both attracted and repelled in the sense of “I could not look away.” The Sublime then is an Idea that cannot be articulated or brought under the precincts of comprehension and any pleasure that is attached to the Sublime is the Delight of the perverse relief at being a spectator. “Sublime violence, Lyotard said, is like lightening. It short-circuits thinking with itself.” He continued,

But the sublime is a sudden blazing, and without future..As it is expounded and deduced in its thematic, sublime feeling is analyzed as a double defiance. Imagination at the limits of what it can present does violence to itself in order to present that it can no longer present.

It becomes clear that the Sublime is not only singular, it is also internal and exists within an individual human being who has failed to comprehend precisely because there is no object involved. The Sublime, contrary to popular art thinking, never resides in nature because nature always has both purpose and form, while the Sublime lacks both purpose and form. Because the reflective quality of the Sublime, which is purposelessness (involuntary) feeling that takes over the mind of the beholder is on a repetitive mental loop, Lyotard refers to this state as “tautological” or a peculiarly repetitive form of a “statement.” So the mind, stunned and shattered by the event or occurrence recoils violently back upon itself and feel the pain of the limits of the Imagination. The mind, unable to present or to represent resorts to Reason or Idea, known as the super-sensible–outside the realm of sensible understanding.

Lyotard directly challenged Kant’s idea that Reason was supreme with the différend which kept reason and understanding forever apart and incompatible, unable to “speak” to one another, a “failure to communicate.” In order to explain the Sublime, Lyotard turned to the successive concepts of quod and quid: the quod is what is (and must occur first) and the quid is what happened. The mind cannot deal with the flash of the immediacy and the strength of the quod and even more stressful is the apparent immediacy of the quid, which seems to occur at the same time as the quod but is inherently different. The quod is the immaterial and the quid is that which is material. The struggle is always between the two: the quid which attempts to present or interpret the quod and the quod that resists representation, causing a différend, which with Lyoard is the Sublime itself.