One of the paradoxes of the discovery of perspective during the early Renaissance was the fact that landscape painting played so small a part in this new “science.” Today, art students are taught to use perspective to measure the distance from foreground to middle ground to background so that the progression into depth seems “real.” As the result of the deployment of centuries-old techniques, the landscape unfolds effortlessly before the viewer’s eye (assumed to be singular, fixed and frozen in time) and ambles with assured ease into the sunset or at least towards the horizon line and the vanishing point. Some objects, from trees or walls, establishing sites, form the repoussoir or that which marks the beginning of the spectator’s stance and pushes space back as far as the unmoving eye can see. Under the assumption that the eye can focus more acutely on things that are near, these are usually painting in more detail, with stronger colors and sharper outlines. Other objects are graduated down in size, becoming smaller as the figures or architectural elements march into the depths. These distant forms are softer, darker and less clear, dimming as human vision dims. As any artist knows, these rules of perspective, from the horizon line to the vanishing point, to the diagonal orthogonals, are but visual tricks of the trade, mimicking an artificial notion of human vision so convincing we believe that this is how we see. Stuart Clark asserted in Vanities of the Eye: Vision in Early Modern European Culture that “…perspective rests on the ultimate visual paradox: complete deception in the service of utter veracity. The optical illusion is given of three-dimensional forms, receding behind a two-dimensional plane but this is conceived as a window on what (and through which) the eye actually sees, constructed according to the way it sees..This, by definition, is what mimetic art is–an ambiguous and irresolvable combination of the false and the true..” 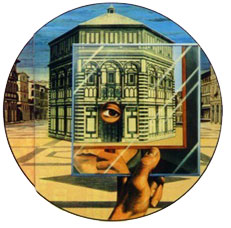 The projection method, Brunelleschi’s peepshow,
according to Rudolf Arnheim in 1978, is an effective method
for the creation of an illusion of depth.

And yet the Renaissance artists who were the early adaptors of perspective were not landscape painters. Focusing on architecture and the human being in space, these artists used landscape or an open-air setting, when they used it at all, as a backdrop for the main narrative. Fillipo Brunelleschi, who is credited with “inventing” perspective, used his new knowledge to draw three-dimensional buildings–the Bapistry of the Florence Cathedral–situated in a three-dimensional space. His early paintings are lost, as Samuel Y. Edgerton explained in his book, The Mirror, the Window, and the Telescope: How Renaissance Linear Perspective Changed Our Vision of the Universe: “It is generally believed that the first of the two lost perspective paintings by Brunelleschi depicted an image of the Florentine Baptistery, then known as the ‘Church of San Giovanni,’ showing it as if observed frontally from the opposite portal of the Cathedral of Florence.” The author then quoted a contemporary eyewitness to the mathematical feat of the architect, Antonio Manetti, who described a small panel of eleven and a half inches square with “burnished silver” for the sky. Manetti explained that Brunelleschi made a small “hole in the painted panel at the point in the temple of San Giovanni which is directly opposite the eye of anyone stationed inside the central portal of Santa Maria del Fiore, for the purpose of painting it. The hole was as tiny as a lentil bean on the painted side and widened it conically like a woman’s straw hat to about the circumference of a ducat or a bit more on the reverse side.” To the modern reader, these are substantial holes, perforating the small painting. But the painting was the means to another end. One did not simply look at the painting but used the panel in tandem with a mirror. The viewer would “place his eye on the reverse side where the hole was large, and while ringing the hole up to his eye with one hand, to hold a flat mirror (specchio piano) with  the other hand in such a way that the painting would be reflected in it..the spectator felt he saw the actual scene when he looked at the painting..” 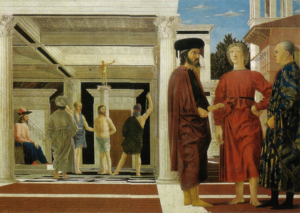 From a dazzling novelty, a primitive stereoscope, painting in the Renaissance became more sophisticated. Thirty years later, in his painting of 1455, The Flagellation, Piero Della Francesca placed his heavenly and sacred figures inside Renaissance buildings and used the omnipresent tiled floors and their elaborate patterns as visual aids in drawing a spatial diagram, a cube for his characters to inhabit. Like Masaccio’s  Tribute Money, the Renaissance artists were thinking in terms of a stage upon which their characters could comfortably play. In his book, Seen/Unseen: Art Science and Intuition from Leonardo to the Hubble Telescope, Martin Kemp wrote of this “box” where people could be placed, like dolls in a miniature house.

“The way we think about space, consciously and unconsciously, is profoundly associated at the deepest structural level with the say that space has come to be represented in Western art from the time of the invention of linear perspective in the Renaissance. The dominant schema of visualization is what might be called the cubic unit, potentially extensible to infinity, but for the most part related to the finite spaces we inhabit inside the predominately urban environments that house increasing numbers of the world’s population. It is a form of ordering that we also show a marked propensity to impose on more rural topographies for a variety of visual, psychological and functional reasons. It is a schema which has pervasively entered world cultures which traditionally have represented space in very different ways if at all,” Kemp wrote.

In her book, The Invention of Infinity: Mathematics and Art in the Renaissance, Judith Veronica Field directly links the Renaissance with modernity or the beginning of the modern era with the invention of perspective. She stated, “We indebted to the Renaissance for the characteristically mathematical nature of what we now call science in much the same way that we are indebted to it for the classical architecture of many public buildings and the Roman style typefaces that dominate our printing..” Field set out to tell the story of the period as “a story of how mathematics became important in the everyday lives of more and more people–craftsmen, tradesmen, and intellectuals.” She continued by stating that her focus would be “..the history of the emergence of perspective studies form the world of artists into that of mathematics. The artistic practice of the fifteenth century led to the invention of a new kind of geometry in the seventeenth. This is undoubtedly the most important of the contributions that art made to mathematics.” For today’s artists, the idea that perspective, a simple mimetic device, should be considered so profound a discovery that it led to the development of modern geometry and mathematics. But perspective enabled an artist to shift from the Medieval worldview of a heaven-ward gaze where there was no space and no time to a corporal world in this physical life of gravity and substance. Renaissance books bristle with charts and graphs and directives for the artists, their bristling lines aggressively asserting the significance of the task ahead: the use of lines arranged in a precise prescribed fashion on a flat plane can create an illusion of three-dimensional space.