Can the Subaltern Speak?

One can posit phases in Post-Colonial theory, moving across time from the post-war reaction against colonial rule in the fifties and the sixties, Albert Memmi (1920-), Aime Cesaire (1913-2008), and Frantz Fanon (1925-1962), to name a few writers, the shift towards an analysis of culture through the lens of representation, the “cultural turn,” of the seventies seen in the work of Edward Said (1935-2003), and then, in the eighties, a decisive break away from the Marxist framework to a Post-Structuralist position. Post-Structuralism, which is a hybrid alliance of philosophy with linguistic theory with literary analysis, allowed for a surge of pluralism. Before the end of the 20th century, there was a tendency to view what is a very complex picture of colonized territories as a homogeneous subject, subsumed under the yoke of imperialism. But as more and more voices from the bottom up being raised on high and asserting themselves, multiple points of view came to light: women, gays and lesbians, a variety of colors and ethnicities and religions.

With the opening of the discourse came new problems, the most important being elucidated by Gayatri Chakravorty Spivak (1942-) who asked a very good question in her groundbreaking 1988 essay, “Can the Subaltern Speak?” The term “subaltern” comes out of the empire itself, for it is a British term for a military designation. A subaltern is a lieutenant, an officer whose rank is one notch higher than the non-commissioned soldiers and below the high ranking officers. The term was carried over from the military to connote the “natives” who were designated as mid-level bureaucrats and factotum figures in the service of the Empire. In order to be effective the subaltern had to learn the language of the colonizer and thus lost authenticity and were slightly removed from their native culture. By speaking the language of the dominator or the ruler, the subaltern validated or “recognized” the Master.

The trap for the colonized was certainly recognized by the early post-colonial writers but it was a problem that has yet to be resolved. When one writes/speaks in what one hopes is an authentic voice, such as Luce Irigaray, then one is not always heard and the impact is limited to one’s own community.  When post-colonial critics use the theories of European philosophers thinkers and apply these Eurocentric ideas to the post-colonial condition, these same writers who question the appropriateness of Europeans speaking of and about the same colonial condition are speaking in the language of the master. As the feminist Audre Lorde (1934-1992) gave a talk in 1984 titled, “The Master’s tools will never dismantle the master’s house.” As a double outsider, a black and lesbian scholar, she asked,

What does it mean when the tools of a racist patriarchy are used to examine the fruits of that same patriarchy? It means that only the most narrow perimeters of change are possible and allowable.

Like Edward Said, Spivak is an exile, living on the faculty of Columbia University. It is a stunning fact that when she was appointed Professor in 2007, she was the first woman of color to be elevated to that rank in the entire history of the University. This one fact explains why her question is important but the fact that she is able to “speak” is due to her privileged position in academia. Spivak, a native of India, a former colonial possession, completed her graduate education at Cornell, an Ivy League institution, wrote her dissertation a white male writer. W. B. Yeats, under the supervision of the renowned scholar Paul de Man (1919-1983). These bone fides gave her “permission” to “speak.” It is ironic that, in her turn, she took up the worthy cause of giving voice to those who were silence/d in society and in so doing takes up the position of someone who is “speaking for” the others. The position of Spivak is split and ambiguous–the colonized speaking as a colonizer–an illustrates the difficulties faced by any Other who seizes the power to “speak.”

Who can speak? And under what conditions does one speak? What language should be used?  The answer depends on the point of view. In  “Can the Subaltern Speak?” Gayatri Spivak investigated the issue of the “subject” in 1988. Borrowing from Structuralism and Georg Hegel, Spivak pointed out that the West is the Subject, the one who speaks and the East is the Object, the one who is spoken of. But Spivak’s essay which challenged the use of Western methodology to examine the non-Western Other, contributed to an important questioning of using Marxism in Postcolonial studies. She stated that the group of scholars who were among the first to consider the “subaltern,” the “Subaltern Studies” group “must” consider the question of whether or not the subaltern can ever speak. As Vivek Chibber pointed out in his 2013 book, Postcolonial Theory and the Specter of Capital, this group at the University of Sussex, used Marxist theory—a point also make by Spivak who effectively revealed the contradictions inherent in Western philosophy which empowers the One and silences the Other. 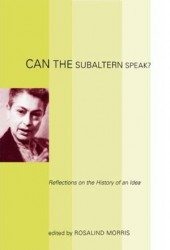 Spivak began her essay by referring to an unguarded conversation between Giles Deleuze (1925-1995) and Michel Foucault (1926-1984), which is an example of unintended ideological thinking.  It was not her point to recount the conversation.  Her point is that two Western philosophers were talking about the Other from the perspective of sovereign subjects. Not only that but Western philosophers, of whom Deleuze and Foucault are but examples, also interpret social and philosophical theories from a very limited and ideological perspective. Why use Marx instead of Mao? Why be confined to French thought? “The unrecognized contradiction within a position that valorizes the concrete experience of the oppressed, wile being so uncritical about the historical role of the intellectual , is maintained by a verbal slippage.” She insists that intellectual should attempt to know the Other and to not take the power position of interpreting the Other from the perspective of the One. The result is ironic: Michel Foucault had previously written about “epistemic violence” when a discourse is imposed upon a silenced group, and Spivak commented,

..a curious  methodological imperative is at work. I have argued that, in the Foucault-Deleuze conversation, a postrepresentationalist vocabulary hides and essentialist agenda. In subaltern studies, because of the violence of imperialist epistemic, social, and disciplinary inscription, a project understood in essentialist terms must traffic in a radical textual practice of differences.

The issue of representation is critical here.  By the time Spivak is writing, Foucauldrian thought has already been applied to a critique of those in power representing those not in power. Nevertheless, Deleuze and Foucault “represent” the oppressed group and speak for the “subaltern” while assuming that they themselves are self-knowing and transparent.  Marx, who had a black son-in-law, refused to acknowledge that the oppressed masses of Europe could speak for themselves. They must be spoken for. Marx made a distinction between “Vertretung” or representation in the political context in terms of substitution in which the society is subordinated to itself and “Darstellung” the philosophical concept of representation in the sense of staging or signification.

Spivak pointed out that Edward Said also criticized Foucault for being complicit in the maintenance of power over oppressed people by mystifying power and by ignoring institutional responsibility.  Said, a Palestinian in exile at Columbia University, maintained that Foucault and other European intellectuals, was caught up in the constitution of Europe as Subject. The Other is represented by the intellectual as, according to Spivak, “the Self’s shadow.”  Both writers agree the position of the One is “epistemic violence,” the “heterogeneous project” to constitute the Colonial Subject as the Other. The activity of the intellectual One results in “an asymmetrical obliteration of the trace of the Other.” As she wrote,

This S/subject, curiously sewn together into a transparency by denegations, belongs to the exploiters’ side of the international division of labor. It is impossible for contemporary French intellectuals to imagine the kind of Power and Desire that would inhabit the unnamed subject of the Other of Europe.

Spivak charged that the nostalgia for lost origins is detrimental to any social realism within the critique of imperialism.  In other words, the concern for the “oppressed” hides a privileging of the intellectual and of the study of oppression (over a study of the oppressed). Jacques Derrida (1930-2004) asked if Deconstruction could lead to actual practice: how to keep the Ethnocentric subject from establishing itself by selectively defining the Other. The problem is benevolent Western intellectuals. Spivak took up the possibility of Deconstructing the presence of the Westerner. Postcolonial critics attempt to displace their own production only by presupposing “text-inscribed blankness” to hide any recognition of the Other by assimilation to the Eurocentric science of writing. Like Fanon, Spivak makes a distinction between the Colonizer and the masses of the Colonized and the assimilated “subaltern.”  The subaltern inhabits a buffer zone of in-betweeness or what Derrida referred to as “antre” or a situational indeterminacy. This class resides within the imperialist epistemic, which hides its essentialist agenda.

While Derrida points to the danger of appropriating the Other through this textual assimilation, Spivak noted that he, Derrida, has nothing to say about women. Third World women are triply disadvantaged; they are poor, black, and female. Spivak suggested that the colonies were subjugated through a “narrative of imperialism” and that First World intellectuals do not recognize the fact that the Oppressed can speak about and know their conditions. The subaltern, like women, have only the imperialist narrative just as women have only the phallocentric tradition. Women are silenced within this imperialistic phallocentric tradition.  The track of sexual difference is doubly effaced through the ideological construction of gender, which keeps the male dominant.  The subaltern female is even more deeply in this shadow.  Her consciousness is ignored and unacknowledged and subsumed by masculine radicalism so that she is a historically muted subplot. Spivak wrote,

Subaltern historiography raises questions of method that would prevent it from using such a ruse. For the “figure” of woman, the relationship between women and silence can be plotted by women themselves; race and class differences are subsumed under that charge. Subaltern historiography must confront the impossibility of such gestures. The narrow epistemic violence of imperialism gives us an imperfect allegory of the general violece that is the possibility of the episteme.

The Third World Woman is a monolithic construction that is an imperialist subject production, a project Spivak called “..the ferocious standardizing benevolence..of human-scientific radicalism (recognition by assimilation)..”  One never hears these women’s voices, only the voices of the Imperialist who claims to be “white men saving brown women from brown men.”  If the Muslim culture puts women under black veils and covers them  with long garments, then Western culture shrouds women with discourse and cultural constructions. The figure of the woman disappears and is shuttled back and forth between tradition and modernization.  The imperialist measures the “protection” of women as a signifier of a good society.

The subaltern is lost in the colonialist rhetoric, in the imperialist program.  Derrida found complicity between European writing, which revealed structures of desire, power, and capitalization. To a woman, a person of color, or to a non-Westerner, this revelation would hardly be surprising.  To fight against inclusiveness and assimilation into male discourse as “victims,” it is important to be specific and factual instead of creating “pathetic” critiques of Eurocentrism. Another possibility is to intervene through silence, that is, a refusal to be engaged with an imperialist enterprise.  To speak or to be silent? If one cannot speak what difference would silence make?  The subaltern is still represented and the woman is still under the “protection” of imperialism.  Spivak closes without closure.

The Subaltern cannot speak. There is no virtue in global laundry lists with “woman” as a pious item.  Representation has not withered away.  The female intellectual has a circumscribed task, which she must not disown with a flourish.