The First Modernist: Christopher Dresser and the Teapot, Part One

Remaking the Teapot
The Story of English Tea

Along with beer and ale, tea is the national drink of England and Ireland, not the mention the former English colonies. The America Revolution was sparked off by an ill-considered tax on tea, a daily necessity and we all know what happened at the Boston Tea Party. The discovery of tea in China is a tale shrouded in myth and legend, but somehow early in Chinese history, someone discovered that certain leaves made boiling water taste good. From China, tea traveled to Japan, and, in both nations, drinking tea was an elaborate social act surrounded by rituals of hospitality. In “All Things Tea,” the complex Chinese ceremony is described:

“The Chinese practice a form of tea ceremony called Gong Fu, which has some similarities and many more differences to the possibly more well-known Japanese tea ceremony. In a Gong Fu style tea ceremony, the tea master preparing the tea for the group is considered an artist in his or her own right. Styles for pouring the water and tea vary individually, and many devote a lot of time practicing difficult and artistic maneuvers. Usually the equipage for this tea ceremony would be a clay Yi-Xing pot and several small teacups, a tea sink or shallow bowl for draining water into, and a few bamboo tools for handling the hot objects. The tea master will arrange the teapot and cups in a circular fashion over the tea sink or in the bowl, and pour hot water into each to rinse the objects and to warm them so that the temperature of the tea is more consistent. This rinse water is discarded, and then a generous helping of tea leaves, usually oolong, is measured into the pot. More hot water is then poured into the pot and the tea leaves will begin steeping. Every infusion in Gong Fu ceremony is very quick, about 30 seconds, though the method for timing is never exactly precise. In one tradition hot water is poured over the outside of the teapot, and when the water is seen to be fully evaporated, the tea is ready to be poured. In another, the tea master must count a full 4 deep breaths before beginning to pour. Either of these methods is roughly a 30 second steep, and remains consistent throughout the multiple following infusions. Then the tea master will begin pouring in a continuous flow around to each of the teacups, a little at a time, resulting in each person having the equal amount and strength of tea in his or her cup. After enjoying this first round of tea, the leaves may be resteeped for many more infusions…”

When tea arrived in Europe in 1606, it was by way of the Dutch who had a very special relationship with the closed country of Japan and were the only European nation allowed to trade there. In the early seventeenth century, the Dutch quickly took to tea and were the first to add milk to a cup of tea. Through their trade with India through the East India Trading Company, the English discovered tea a few decades later and introduced it to the public in 1654 via coffee houses, a male establishment where men could socialize. By the eighteenth century, the favorite hot drinks were very similar to what they are today: coffee, tea, and hot chocolate–all commodities discovered through international trade. At first, because it was very expensive, tea was a court drink, introduced to the nobility by Queen Catherine, wife of Charles II. For the first few centuries truly fine tea was available mainly to the upper classes but over time, the price of tea gradually came down and became the national drink. Breakfast was a vast meal washed down with tea, Poor Bear looked forward to his mid-morning tea called “elevenses,” but the true star of the tea culture in England was “afternoon tea,” a custom invented in the mid-nineteenth century. 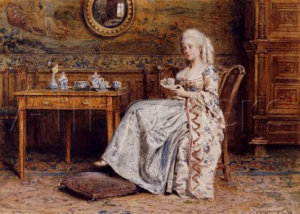 Anna, the 7th Duchess of Bedford at her Afternoon Tea

It is no accident that afternoon tea was invented by a member of the nobility, Anna Maria, the seventh Duchess of Bedford. The introduction of afternoon tea resulted from a change in meal times. For centuries, among the wealthy, the mid-day meal would last for four or five hours, but in the nineteenth century, perhaps as the result of middle class life styles and the demands of the modern workplace, the large meal of the day was moved to seven-thirty or even later. As a result that was a long stretch between breakfast and dinner without food, so the Duchess created a very substantial afternoon meal, afternoon tea. But this eating opportunity was more than merely satiating an appetite, this mid afternoon respite was laden with food, more equipment, and complex rules. Replete with amble leisure time and plentiful disposable income, it was the wealthy women who brought tea home and created the idea of “equipage,” or a wide range of equipment to be deployed in elaborate rituals as complicated as anything in China or Japan.

There is a distinction between “high tea” and “afternoon tea,” and the difference is one of class. It was the lower classes who take “high tea,” a late afternoon, early evening meal, which ends a day of hard labor. The upper classes, were less interested in eating and more interested in socializing. The first tea pot is dated 1670 and was a vessel presented to the East India Trading company by George, Lord Berkeley. The first tea spoon was invented six years later, and, in a signal that tea had migrated out of coffee houses and into the home, the first tea kettle emerged around 1687. But the early the next century, the tea canister or caddy appeared and by the early eighteenth century, having tea in the home is common enough for genre paintings to depict the occasion. Although milk was taken in tea in the seventeenth century, it was not until the 1720s that specialized jugs were designed. At the end of the eighteenth century, Swiss painter Jean-Étienne Liotard painted five know still lives of tea sets, which by the 1780s had become elaborate. His painting at the Getty Museum shows a porcelain set, an alternative to the customary and very expensive silver set, on an inexpensive Asian lacquer tray. The tea is depicted as over, but all of the basic essentials are essential: six cups and saucers, a teapot (once spelled “pott”) a sugar bowl and a milk jug and tea caddy. 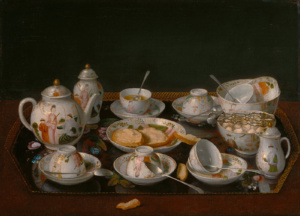 As on the tray is a sizable “slop” bowl for cold tea and leftover tea leaves. Liotard clearly recorded a middle class tea set, signaling that having tea had filtered down the social ladder. This painting also shows that the tea cups, like their Chinese counterparts, had no handles, hence, having a “bowl” of tea. Handles for hot cups of tea took three centuries to invent and did not appear until the nineteenth century. Saucers with indentations to hold the bowl originated in China and were, at first, very small, too small to hold a tea spoon. Speaking of spoons, the tea sets, whether porcelain or silver, were bristling with implements such as tongs for sugar cubes. The mote spoon was used to measure the amount of tea taken from the caddy and could also be used to skim off floating debris, including insects from the surface, and finally, the long pointed end of the mote spoon could be used to unplug a clogged tea spout. By the end of the eighteenth century, these spoons were supplanted by the tea strainer. Liotard’s tea tray included a plate for buttered pieces of bread, but a century later, the food offerings became very elaborate, including savories and sweets.

Domestic tea in drawing rooms were presided over by women. The woman who poured was called “mother,” and she took care of her female friends, making sure they had enough to eat and drink. Just as there was seventeenth century controversy over the medicinal effects of tea, good or bad–Samuel Pepys thought that tea made him feel better–there was consternation over women congregating. Some men felt very threatened by women sitting together over a cup of tea and having a conversation, which was defined as “gossip.” By the nineteenth century, tea was embedded in English culture. Julie E. Fromer quoted Anthony Burgess as saying, “Perhaps tea is so woven into the stomach linings of the British that they cannot view it in either a scholarly or aesthetic manner. It is a fact of British life, like breathing.” Tea became part of the English national identity, marked class distinctions and divided men and women, creating rituals and enforcing tea breaks for laborers. Tea changed society in Great Britain, and, by the end of the nineteenth century, the ubiquitous tea set would become a favorite target for the artists and designers. 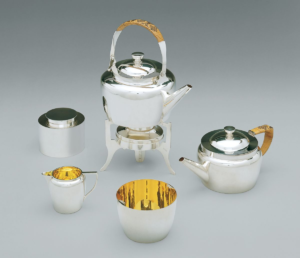 The research on Christopher Dresser and Charles Henry Mackintosh reveals an unexpected commonality: their most well known works, the projects in which the artists’ modernity can be seen most clearly were on the theme of tea and what brings these two artists together is tea. The very British act of having tea, complete with its elaborate rituals and many pots and bowls and  pitchers and cups, saucers, and spoons and tray and so on, was modernized by Christopher Dresser. Dresser took the traditional silver service, ironed out the old-fashioned repoussoir design, straightened out the curved shapes and pointed the way to the future. As seen in the Willow Tea Room of 1904, the furniture designs of Charles Rennie Mackintosh were severe and plain, stripped down, and often uncomfortable due to the artist’s dedication to design over ergonomics.