The Différend (1983) as “The Postmodern Condition, Part One”

Part One: The Historical Context

The life path and careers of Jean-François Lyotard suggest that this philosopher needs to be understood as a bricoleur. A scholar who stood in a liminal position in history, Lyotard appropriated and borrowed concepts from other philosophers and refitted these ideas or motifs for a future he could not see but could predict..in part. Although he was criticized by more than a few fellow philosophers for incorrectly using the “language games” of Ludwig Wittgentstein, for example, Lyotard can also be seen as someone searching for the right philosophical tools to describe his unique task. The reader follows his trajectory, sometimes scattered and indirect, and finds the tracks and traces of Lyotard’s own biography upon his mature philosophical writings. He was frequently in a position to observe cultural changes that would leave lingering marks on society and his thought. Although he once considered becoming an artist (a desire that would manifest itself in other books), Lyotard became a teacher and was posted in Algeria in from 1950 to 1952, where anti-colonialism, once below the surface, was breaking through. He was in Algeria during the same period as Frantz Fanon, author of Black Skin, White Masks (1952) and left just before the arrival of historian Pierre Vidal-Naquet (1930-206), who wrote scathingly of the use of torture by the French colonizers in Torture: Cancer of Democracy: France and Algeria 1954-1962 (1963).

Lyotard’s commitment to social activism and Marxism, which was triggered during his Algerian period, was tested ten years later when he was teaching at Nanterre, the Ur source of student uprisings that spread throughout France. Indeed, it goes without saying that anyone drawn to the vocations of arts and religion (he once toyed with becoming a monk) would be temperamentally disinclined to accept authority. Like many intellectuals of his time, Lyotard was a politically active committee Marxist, belonging to two separate groups, Socialisme ou Barbarie and Pouvoir Ouvrier, before disillusionment with what was an apparently a lost cause set in. The proletariat rose but the regime did not fall and, after the “days of May,” all went seemingly back to normal. But just as the barricades of the uprisings of May 1968 were dismantled, so too were the metanarratives of totalizing reason.   While Lyotard abandoned the metanarrative of Marxism, the ingrained concern with social domination was never far below the surface of his works and he never stopped practicing critique and he never got over his suspicions of systems and of the machinations of those in power. Witnessing the injustice and brutality of French rule in Algeria apparently gave Lyotard a heightened sense of injustice and an instinct for situations which allowed unfairness to breed.

Indeed, far from celebrating “the Postmodern condition,” Lyotard critiqued the current state of affairs, in which the state owned and controlled knowledge, now computerized and contained in giant databases, poised to take away individual autonomy. As was pointed out in previous texts, he was viewing and reviewing what he clearly understood to be an apocryphal shift in epistemology and, consequently, an abrupt change–knowledge became information. Once in control of the mode of information production, the system could then instrumentalize students for performatativity for the state via education. The habit of a Marxist analysis existed as a subterranean subtext with in The Postmodern Condition: A Report on Knowledge–the computer now became the mode of producing knowledge and, consequently, cybernetics was the new base throwing off and generating new superstructures that were incompatible with the creation of “pure” knowledge.

Certainly much of what Lyotard foresaw has come to pass: knowledge is used instrumentally by the system which educates its citizens so that they can perform in certain desired ways. It is at this point that Lyotard’s vision was halted: he could not see over the horizon, but we now know that the Internet has wrested control of information/knowledge and its production not only from the government but also from corporate interests. These very corporate and systems-based interests vie today to seize and control these new modes of production, as Lyotard would have predicted, but out of The Postmodern Condition came new concerns that still plague the culture today. The philosopher foresaw a silencing of non-compatible or noncompliant discourses by outsiders on the part of a system intent on maintaining itself. On one hand, the new épistemé is nurtured by performativity, based upon one’s competence with language games; and on the other hand there are ways to counter the imperialism of the game through “little narratives.”

It is at this point in The Postmodern Condition that Lyotard recognized the very real possibility that language games not only allowed for articulation within the rules but that also these very regulations could also be used for the silencing of some of the game players. Using the words “violence” and “terror” to describe this refusal to hear certain kinds of utterances, Lyotard signaled his next step in his investigation: his most formal and provocative work, an examination of what he called “le différend.” The word “formal refers to the measured pace of the book which is ordered into Wittgensteinian paragraphs, each of which has its own number. Nested inside this procession of propositions are intermittent series of paragraphs which discuss, in a smaller font, related writings of other philosophers and this internal progression of the argument has its own numbering system. The structure within a structure is rarely remarked upon in terms of its metaphorical value but it is worth noting that Lyotard included numerous other philosophical voices in a book which is devoted to examining the language games that silence one group so that another group can be empowered. He positioned a chorus of multi-vocaled discourses against the voicelessness of the Jews during the Holocaust.

Lyotard’s primary example of the result of a différend is Auschwitz,, which makes the timing of the writing and publication of Le Différend as interesting as its internal complexity.  When he returned to France in the early fifties, Lyotard arrived in a nation that had allowed itself to forget the Holocaust and the fate of French Jews at the hands of the French collaborationists and had rewritten the story of the Occupation as one of brave resistance and victimhood. In her book, Commemorating the Holocaust: The Dilemmas of Remembrance in France and Italy (2013), Rebecca Clifford noted that it was not until the late 1960s that French historians gradually turned away from the narrative that the Vichy government was to blame for the victimization of all French people and began to examine the uncomfortable question of the fate of the Jews of France. In fact, the Memorial des Martyrs de la Deportation, built in 1962, listed the names of all of the French who were deported under the Nazis and by the Vichy government and was, therefore not specifically a Holocaust memorial, thus denying the fact of deliberate extermination and hiding French guilt. 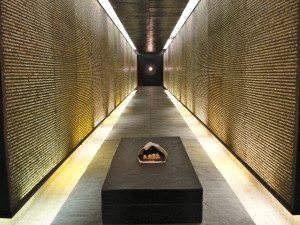 In her introduction to Harnessing the Holocaust: The Politics of Memory in France (2004), Joan Beth Wolf explained the post-war discretion on the topic of the Holocaust in France as an understandable reluctance on the part of French citizens to identify themselves as “Jews” after the War. Like most Jews in Europe, those of France considered themselves assimilated and could not comprehend that they were not “French,” but Jewish and that that identity–one they and long considered secondary–would cost them their lives. It was the Six Day War of 1967 that awoke the not so dormant wartime trauma and the French Jews, alive to the existential danger to Israel, spoke against De Gaulle’s support of the Arab perspective and, as Wolf described, found a political voice. Two years later Marcel Ophuls’ The Sorrow and the Pity, a four hour documentary of the German occupation, made for French television, was banned from French television. Composed of clips from eighty hours of testimony gathered by Ophuls, the series destroyed the myth of the brave French Resistance and detailed how French collaborationists were responsible for sending Jewish children to concentration camps. This odd lacunae in history–the reluctance to seek the truth and the resistance to the facts–was not a particular French fault but a generalized situation and the French Jews were actually early in their demands that history be correctly and completely recounted. After decades of disinterest in the fate of the Jews, America was riveted by a home-grown television mini-series, Holocaust, in 1979, and this series traveled to France and Germany, similarly informing a new generation of the pasts of their parents. On the heels of the slow unfolding of acknowledgement came Claude Lanzmann’s Shoah in 1985 in France and the “Historian’s Controversy” in Germany.

Although opposed by Lanzmann’s magisterial eight hour film about silence, France had its own version of historical revisionism in which the Holocaust was denied by pseudo-historians, Robert Faurisson, Paul Rassinier and Arthur Butz. Pierre Vidal-Naquet, who had so strongly spoken out against torture in Algeria, then turned his attention towards this deliberate attempt to deny the historical truth in a series of essays published between 1981 and 1987 (later collected in one book, Assassins of Memory: Essays on the Denial of the Holocaust in 1992). Lyotard’s Le Différend was written in réponse to both The Postmodern Condition and to the early essays of Vidal-Naquet which attempted to reassert the power of actual lived history against the unimaginable absurdity of literary cant being used to obliterate the past. Lyotard often mentioned Vidal-Naquet, not a well known historian in the United States, in his book and like this younger writer, he made  Robert Faurisson his chief foil or starting point for what was a contemplation on the inherent dangers of the rules of reason. Faurisson denied the Holocaust along the specious lines of deploying the clothing of reason and logic, unwittingly (perhaps) echoing the asserted rationality of extermination as uttered by the Nazis.

Against such word “play,” Le Différend, for all its careful structure and disciplined order, approached the question of the Holocaust from a careful intellectual distance that attempts to veil the undercurrent of  political passions beneath the measured words. The text approaches the topic of Auschwitz with the care of a mandator confronting a bull: Lyotard suddenly focuses on the linguistic mechanics of the dehumanization of the Jews only to withdraw into long drawn out philosophical ruminations until suddenly he reverts and produces a few new paragraphs on the Holocaust. His is an elaborate and delicate dance with the most difficult of topics, a subject that defies language and explication. Wisely, Lyotard, not a historian (he once wanted to be an art historian), prised open the language game that deprived the victims of their right to speak: le différend.

The next post will discuss the theory of Le Différend.