The Enlightenment and Reason

The Enlightenment is also referred to as The Age of Reason, a time period that stems from the awakening of European interest in science in the seventeenth century and ends with the unreason of the French Revolution at the end of the eighteenth century. The importance of individual scientists, such as Copernicus and Galileo and Newton, who sought to explain the heavens, not in terms of God but in terms of mechanics, and the significance of the voyages of world explorers, such as Christopher Columbus and Captain Cook, indicated a cultural shift away from spiritual interests and toward worldly interests and a desire to expand knowledge.  The need for worldly answers to cosmic questions overtook the spiritual dogmas, and the desire to search the real world for commercial purposes proved to be more compelling than religious revelations. Certainly it needs to be pointed out that the Enlightenment followed a long period–centuries in fact–of religious wars, from the Crusades to the struggle between Christian sects in Europe. Unlike Asia or the Middle East, Europe had been torn apart by these religious disputes over fairly minor issues of doctrine and the trauma of these struggles cannot be underestimated in the revulsion against spiritual dogma.

Over time, it became impossible for educated persons to accept theological limitations of Church dogma and more difficult to explain the world as “God’s will,” while remaining faithful to the idea of a deity. Somehow, religion and science had to be reconciled. Although it does not acknowledge itself as a substitute belief system, philosophy would take the place of established religion as a way to explain the world, and, by the Eighteenth Century, philosophy was tasked with the problem of establishing a new system of ontology (a theory of being) and epistemology (the ground of knowledge) to replace God’s plan for the world.  Faced with the apparently irrefutable findings of scientific discoveries, philosophers developed a contempt for religion and welcomed the new light into a world long shrouded in the darkness of misguided belief in a Deity. As Voltaire (1694-1778)  remarked, “Of all religions, the Christian should of course inspire the most tolerance, but until now Christians have been the most intolerant of all men.” 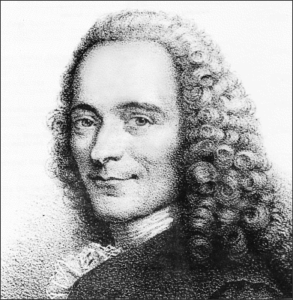 If God, Voltaire declared, did not exist, we, the people, would have found it necessary to invent a supreme being.  Voltaire’s cynical statement comes very close to the Modernist concept that all aspects of culture are constructed. Most of the Enlightenment philosophers and political thinkers were Deists in that they believed in a God but rejected organized religion as superstition. Severing themselves from the comforts of certainty that religion brings caused pain.  “I grieve,” Denis Diderot (1713-1784) mourned, “that I can no longer believe in God.” The philosophers were at the beginning of a process that moved Western civilizations away from the received wisdom of religion to the relativism of philosophical systems. Because the Enlightenment was based upon the scientific model, there were earthly answers for everything. One conceived of a hypothesis and then tested the theory by employing empirical methods. Reflecting the coming of machines and modern technology, the eighteenth century universe was conceived of as, not a heavenly realm, but a simple clock, a logical and rational mechanism, neutral but dedicated to its purpose.  Human beings were mere cogs in this vast system, and insignificant cogs at that, in this vast impersonal, soulless, uncaring machine without a god to appeal to.

The notion of the universe as a gigantic machine reflected the new concern with the new technologies that were connected to the Industrial Revolution.  Human beings, who had invented this revolutionary machines increasing found in factories, not God, were in the center of this new universe.  The philosophers were confident that God’s mercy, capricious as it was, could be replaced by human reason and rationality. The Enlightenment, in its own way, was based upon a faith, every bit as powerful as the Christian system that was being phased out. The “faith” of the philosophers was based in human Reason.  “Dare to reason…Have the courage to use your own minds…is the motto of the Enlightenment,” Emmanuel Kant (1724-1804) declared in 1784 in response to a question asked by a Russian official Johann Friedrich Zöllner. The question was circulated to European philosophers who answered the famous question in the Berlinische Monatsschrift. There were two elements of Reason. First, the Enlightenment proposed a thinking individual self-actualized human being, existing independently of faith and powered, as it were, by his and her own intellectual powers. Second, Reason was the basis of science: one made logical deductions and accepted the inevitable conclusion. If the universe was rational, a machine, then society could also be rational and human beings could come to logical and orderly decisions on their own by reasoning like scientists. So began centuries of assumptions based upon what was really myth–the people could be rational.

Philosophers assumed that there was a rational order of eternal truths and philosophy in the Age of Reason and would seek to ground their deductions in universality and transcendence.  They also assumed that human beings were perfectly able of recognizing the validity of these truths and that people would act according to these obvious truths. Reason was a certain kind of thinking based upon a logical progression from hypothesis to conclusion. It was “self-evident,” a favorite term of the philosophers, that humans would not only accept truths derived from the mechanism of Reason but would also act according to these truths in their everyday lives. The idea that people might act irrationally or counter to their best interests or that they might oppose “self-evident” truths was not an option. The Enlightenment philosophers, even those who owned slaves, such as Thomas Jefferson, never questioned the powers of Reason, even when (self)aware of the contradictions embedded in their thinking. Kant brushed aside any claims of women and non-white, non-Europeans despite claims of universality in his Critiques. For Jefferson and Kant, for example, rational thinking led inextricably to the humanity of slaves and of women but accepting such conclusions, much less to act upon the “natural rights” of these humans, would lead to an upset of the order to things.” We see the same lacunae in the minds of many of the Enlightenment thinkers. In 1776 Adam Smith wrote An Inquiry into the Nature and Causes of the Wealth of Nations, which, for European nations, was built on the slave trade, with as little discussion of the inhumanity of human trafficking as possible.

The philosophically blind eyes that were turned away from the plight of the oppressed reveal in the silences or in the intellectual elisions the concealed political texts embedded in supposedly abstract philosophy concerned with universal laws. In fact the function of Reason in the Enlightenment was to critique, to examine existing belief systems and institutions and to analyze them through rational thinking and logic or, in other words, to deconstruct the current loci of power. Indeed as Jean de Rond d’Alembert (17171-1783) noted in 1753 An Essay upon the Alliance betwixt Learned Men, and the Great that the intellectuals, the gens de lettres, of Europe lived and wrote in repressive regimes that were at odds with the very treatises being penned on individual freedom and natural rights. Not only were their ideas at variance with their rulers, these philosophers, presumably autonomous humans, had no power to change their contradictory conditions. Indeed d’Alembert, mathematician and editor of Diderot’s Encyclopédia, challenged his fellow intellectuals who quarreled among themselves and slavishly sought the favor of les grands, the aristocrats. Unfortunately, for many of these philosophes, it was the patronage of those in power that supported the radical  writings of the house intellectuals. As Dana Goodman pointed out in The Republic of Letters: A Cultural History of the French Enlightenment (1994), the ideal of the “republic” of which the philosophers dreamed was an unbearable contradiction to the monarchies in which they lived. These kinds of unresolvable differences brought to light through critique would result in revolutions.

Secular intellectuals believed that the time of Christianity had come and gone and that religion would be replaced by scientific, social and economic Progress. Progress, social, political, scientific, was the logical outcome of the forces of Reason. Progress, the philosophers and scientists assumed, had been impossible when timeless spiritual values dominated society. The notion of “timeless” surely prevented progressing to new ideas and novel concepts, considered unnecessary if all one needed was spiritual belief in powers beyond this world. From the seventeenth century, progress was the inevitable product of unstoppable technological advances fueled by scientific discoveries and inventions. The Age of Reason was grounded in an optimism that Progress would improve humanity, which now cleansed of superstition, could rise as rational and reasonable human beings elevated by scientific practices.  Rational thinking could create a regularized system for living, a system that was logical and produced a new enlightened social order that would be self-regulated. Rather than explained as a sudden strike from an angry God, natural events were understood as having a scientific explanation. A flood was too much rain, not a punishment from God. Order or disorder came from laws that arose from Nature, not God.  These laws were inevitable and irrefutable, or “self-evident” because they were a priori and logical, that is pre-existing human contemplation. Swiss philosopher, Jean-Jacques Rousseau (1712-1778) based his ideas about the human condition upon a Natural Law that could be utilized to resolve social conflicts. Humans could come together as “natural” equals and freely negotiate a Social Contract of mutual benefit. In The Social Contract of 1762 he wrote,

Man was born free, but everywhere he is in chains. This man believes that he is the master of others, and still he is more of a slave than they are. How did that transformation take place? I don’t know. How may the restraints on man become legitimate? I do believe I can answer that question..This question might be rephrased: “How is a method of associating to be found which will defend and protect-using the power of all-the person and property of each member and still enable each member of the group to obey only himself and to remain as free as before?” This is the fundamental problem; the social contract offers a solution to it.

The Social Contract is the Age of Reason’s answer to its critique of the existing systems. An intellectual critique of the kind championed by Diderot, the editor of the twelve volume Encyclopédia, has a certain transcendence in that within salons and coffee houses and universities a social and political critique is disembodied from the real world. And yet these Enlightenment critiques that placed reason before religion and the social contract above authoritarianism spread beyond the philosophical confines and became part of the body politic of the Western world, with long-term consequences.