The Political Revolution in America

Supported by the revolution in industrialized production, which enriched a new class of entrepreneurs, several important political revolutions cemented the middle class into power.  Made by “new men,” new money created new forms of power for the newly educated and newly educated professionals and businessmen who began to chafe under the old-fashioned notion of “the divine right of kings.” Looking back, it is clear that the aristocratic class—an anachronistic class that produced nothing—was doomed to extinction in a new age in which production had become a new value. In some nations, the dinosaur elite faded gently into the good night, but, in other countries, a revolution was necessary to dislodge the ancien régime. The economic revolution of the rise of industrial manufacturing gave impetus to a social revolution which would inevitably be followed by political revolutions, first in America and then in France, and finally in England. While the idea of political revolution differed from nation to nation, the idea of social freedom and political change  spread from America to the Old World, the European continent. The purging of the ruling classes continued for over one hundred years, culminating, perhaps, with the fall of the Berlin Wall. All of these revolutions were products of the promise of the Enlightenment.

It is worth noting, however, that these so-called “revolutions” did not include women, people of color, or the poor.  Only white men with a certain amount of property and income were eligible for the enormous cultural changes that marked the beginning of the nineteenth century. One of the more profound questions of history is how to judge the founders of America who excluded women and “counted” slaves, for political purposes, as three-fifths of a human being. On one hand these Forefathers were men of their own time, on the other hand they were supposedly “enlightened,” but they failed the nation and refused to face up the meaning and promise of the word “equality.” Allowing women full citizenship could be easily avoided but for the founders of America, slavery was an unsolvable problem. Many of the signers of the Constitution were slave owners who assumed (incorrectly) in an astonishing display of dissembling, that slavery would wither away on its own. That said, those pioneering revolutionaries in Philadelphia set up an “experiment” in democracy, an experiment that is still being tested. As audacious as it was, the first of these political revolutions–power to the people–was in America and had a limited effect at first, perhaps because America was such a great distance from Europe. At first, the American Revolution was an improbable escape from the clutches of the British Empire in its early days of understanding how to manage far away colonial possessions. Later, the revolution of middle class people throwing off the yoke of inherited power was seen as a beacon for other rebellious peoples seeking to determine their own independent fates. The French Revolution of 1789, which was inspired by the War of Independence in America, was far more impactful upon European politics and society. Inspired, by the actuality of the French events–a climate shift that produced bad harvests and starvation for the lower classes and by ideas of natural rights and equality, the French Revolution upended the divine right of kings in a continent full of kings, queens and emperors.

In 1776, the American colonies presented a “Declaration of Independence” from the Mother Country, England, and followed the demand for more autonomy with a successful Revolutionary War. With financial and military help from England’s greatest rival, France, the American Colonies freed themselves from the hereditary monarchy and established an experiment in self-governance called “democracy.”  Inspired byEnlightenment ideas of “natural rights” and “the social contract,” the American politicians, from George Washington to Thomas Jefferson to Alexander Hamilton, were well born, well educated, and well bred. However, even wealthy planters such as George Washington, were not European aristocrats and were inherently subservient to their English rulers. As “colonists,” they, like all Americans, were subjects of a King and, as such, could never be the nobility. Because the colonists could be only two classes, middle or lower, regardless of social prominence or income, a certain rough social equality (with the exception of slaves) was established among them. Like the philosophers of England and France, American leaders were socially ambitious middle class (white) men who were sensitive to the winds of change. Influenced by the British Philosopher, John Locke, and the French philosophers, (François-Marie Arouet) Voltaire and Jean-Jacques Rousseau, Americans began to question their subservient roles and to challenge the British right to rule them. Britain was the strongest maritime power in the world, well on its way to becoming a huge colonial empire, but England was far away, the lines of command were impossibly long, and the Americans had become accustomed to taking care of themselves and running their own affairs. The resulting revolution was predictable and inevitable, even if the end, America victorious, was remarkable.

In comparison to the later horrors of the French Revolution, the American Revolution was a civilized affair. Based upon philosophical ideals that, by the end of the eighteenth century, were widely accepted, the Americans fought for their “natural right” to freely determine their own “social contract.” The role of the state was to ensure the happiness of the inhabitants, and, according to Rousseau, had a rather limited role as protector of the people’s rights. The concept of “natural rights,” put forward since the seventeenth century, clashed with the imperial and mercantile desires of the British Empire and this clash between the inalienable and economic imperatives was a bellwether of things to come. Writing in 1776, while Thomas Jefferson was penning the Declaration of Independence, Adam Smith wrote An Inquiry into the Nature and Causes of the Wealth of Nations and saw capitalism as a juggernaut that cared much for economic imperatives and little for “natural law.” Writing words that could be written today, Smith remarked,

The British, naturally, felt that the American colonies must play their proscribed role as captive consumers in the mechanism of imperialism. The Americans had other ideas: freedom, independence and the pursuit of happiness through self-governance. The conflict was between philosopphy–Rousseau and the inevitable economic imperatives—Smith. Inspired less by the noble ideas put forward by the beleaguered colonists and more by the opportunity to avenge their failure in the Seven Year’s War, the French lept to the defense of their American ally. Baffled by the unreasonable demands of their restive subjects, the British found themselves in a new kind of war, an unequal war, that any occupying power must confront: insurgency and guerilla (“little war”), complicated by long supply lines across the Atlantic Ocean. Despite the colonial adoptions of Native American style fighting, the Revolutionary War itself was fought according to the traditional rules of warfare and the British were outflanked and outsmarted by the combination of a stubborn native army and its determined French partner. The defeated British withdrew to establish their Empire elsewhere but invaded once more in 1812, attacking America, now an ally of Napoléon, but the young nation held firm against the former masters, even when the new home of the President, the White House burned.

To the astonishment of Europeans, many of whom shuddered at the though of “democracy,”seen as mob rule, the upstart American colonies had not only won their freedom but had also written a very serviceable Constitution by 1789. To the amazement of Europeans who dreamed of equality but seemed unable to achieve it, the “American Experiment” worked. Because the American Revolution was so unique, it was difficult to appreciate how extraordinary the victory of the Thirteen Colonies was. The Thirteen Colonies were fortunate in their leaders and their philosophy. Despite their major faults and moral and ethical failures, their inability to transcend their own narrow interests, the leader so the American Revolution were intellectuals who wrote a thoughtful set of rules based in universal values for the new and fragile nation. The men who composed the Declaration of Independence (re-writing Thomas Jefferson’s original draft) and the Constitution wanted to create an entirely new Social Contract, based upon principles of equality, democracy, and a balance of powers within the government. 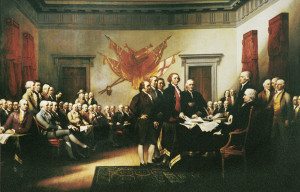 In contrast to the democratic system devised by the Americans to distribute power as evenly as possible among the inhabitants, most revolutions are fought to replace one power source with another, for a revolution is essentially a “revolving” of power, not a change in the way in which power is distributed. Americans accepted self-governance with equanimity. Although about one third of the population did not care who ruled America and one third were loyal to the English, there was no civil war and no social disorder, only a need to establish a firm legal foundation for the new nation, where all factions, different and indifferent, came together as “Americans.” Using the rational thinking of the Enlightenment, wise and articulate men like John Adams and Benjamin Franklin guided the nation to the concept of a government by consensus and based that agreement upon enduring documents, from the Declaration of Independence to the Constitution to the Bill of Rights. Only when the American Revolution is contrasted to other upheavals in power can one appreciate the value of a George Washington, who refused to be King and agreed to be President reluctantly and only temporarily. Power was to be handed off after an election of a legitimately elected successor, a custom that has been followed faithfully to this day.

Rarely in history does a group of good people come together with good intentions and create a good thing. A far-flung colony somehow managed to produce a large number of astute political thinkers guided by Enlightenment philosophy, Christian religion, and something the expatriate Englishman and revolutionary upstart, Thomas Paine, called “Common Sense.” As Paine wrote in December 23, 1776 for his series The American Crisis,

“These are the times that try men’s souls. The summer soldier and the sunshine patriot will, in this crisis, shrink from the service of their country; but he that stands it now, deserves the love and thanks of man and woman. Tyranny, like hell, is not easily conquered; yet we have this consolation with us, that the harder the conflict, the more glorious the triumph. What we obtain too cheap, we esteem too lightly: it is dearness only that gives everything its value.”

The American democracy was far from perfect and was, indeed, incomplete. The rights of democracy—government by the people and for the people—were extended in a limited fashion. The contradictions of eighteenth century America are obvious today, but the conflict between demanding democracy for the few while limiting democracy for the many were not unknown to the Founders. The rights of women and slaves were debated in Europe and America, and yet, despite the existence of the discourse on human rights, the writers of the Constitution decided, deliberately, to leave women out and to postpone the problem of slavery for the next generation to solve.  The result was a delayed democracy for women and people of color.  But even this limited democracy was a source of wonder for all outsiders who observed the United States with amazement.  A social revolution had become a political revolution.