INTRODUCTION TO THE ENLIGHTENMENT
A Question of Philosophy

Like any great cultural change, the Enlightenment was long in gestation, but its range was short. The Enlightenment, a revolution in philosophy, was strictly a Western phenomenon, linked to Modernism in the sense that certain “modern” social and economic conditions propelled a new form of thinking. When these modern conditions did not exist, the Enlightenment or something like it did not emerge, simply because there was no need for a new epistemology. There was no Enlightenment in Africa, Asia or India, meaning that any discussion of the Enlightenment must acknowledge and deal with its limitations. For example, although the Enlightenment was confined to Europe and America, the philosophical systems it engendered were not extended to either women or people of color.  By the eighteenth century, a critical mass of philosophical thinking and social custom had emerged, reflecting a newly capitalistic form of exchange and the consequent rise of a middle class.  The Enlightenment can be understood precisely in terms of its entomology–that which sheds light: light into the darkness of religious “superstition,” a word that very precisely targeted religious thinking dependent upon the will of God.  The principal conflict of the Enlightenment was the contest between established religious beliefs and a growing body of scientific knowledge that grounded knowledge, not in the mind of God, but in an exercise of empirical evidence.  Upon this dialectic between faith and science, struggles for social, political, and economic parity would be launched and would last to this very day. The Enlightenment as a very particular way of thinking in the West resulted in the so-called “death of God” and the rise of science. 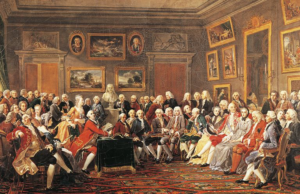 Once the social and political links with God were broken, slowly over a century a series of dominoes tumbled. First, the Enlightenment established new philosophical ideas concerning the grounds of knowledge–epistemology—that is the knowledge was based upon empirical observation and provable hypotheses. Second, the new economic system, capitalism was global by the eighteenth century and created new wealth for an emergent class, constructing itself in the space in between the aristocrats who inherited their power and the lower classes who were legally powerless. It was the desire of this new class to encroach upon the powers of kings and courtiers,  that new ideals, such as “liberty, equality and fraternity,” “all men are created equal,” and the “inalienable right” of the “pursuit of happiness” would emerge. What were essentially political slogans, designed to delegitimize the ruling class, became, over time, ideals which would not be forgotten, but it would take time for the Enlightenment to become more than the concepts of speculative philosophers and the cant of aspiring politicians to become a gradually unfolding reality that would impact all people, not just white males with property.

A complex phenomenon, the Enlightenment was defined by one central question: how can life be lived and understood without God?  If God was “dead,” as Friedrich Nietzsche proposed a century later, then the Deity was certainly an animated corpse, going to its demise, kicking and screaming, and becoming reanimated at unpredictable intervals. The Enlightenment was confronted with Counter-Enlightenments, such as Romanticism and Catholic revivals, but politics, society and economics continued their inexorable march down the secular path..in the West. The twenty-first-century saw the rise of fundamentalism in the Muslim communities of the Middle East and Asia as a direct counter response to the invasion of modernity from the West.  Over time, Christianity came to occupy a smaller place in Western culture and ceased to be the basis for society’s belief system, while thriving in certain communities in segments of Europe and America. The new century would witness the reemergence of faith-based thought, resistant to science and to empirical testing. The question for the Enlightenment today would be are these vestigial reactions or a genuine pendulum swing against three centuries of being “enlightened?”

Once religious faith had permeated Western life and the answer to all questions was “God’s will.” It was God’s will that the king ruled the realm; it was God’s will that the duke in the castle should be respected. In other words, God’s will held up and reinforced the existing power structure, a truth that did not escape the revolutionaries of both the American and French revolutions.Unquestioning belief in God was challenged by two forces that proved to be critical to Enlightenment thinking.  First, was the idea  of “natural rights,” that is, the notion that people were created free and equal and had, as human beings, certain rights that could not be violated.  The concept of “natural rights” would be articulated by Enlightenment philosophers, from Jean-Jacques Rousseau to Thomas Jefferson but it dated back to the Twelfth Century and was present in a nascent form during the Medieval era.  The second crucial element in creating the Enlightenment was the explosion of scientific experimentation and results, such as the revelation of Copernicus that the earth revolved a around the sun, that shattered doctrines supported by the Church, such as the earth was the center of the universe. Although there were certain scientific discoveries that particularly irked the religious authorities, such as the findings of Galileo, the combined weight of empiricism and the scientific method undermined the ability of religion to insist upon unquestioning belief, once these beliefs had been scientifically disproven.  Doubt entered into society.

Western culture shifted decisively towards secular questions and secular answers. The result of secularism was a ripple effect that questioned the validity of the “divine right to rule,” creating a question of how could society be governed without God.  It was not just a question of government in the sense of whether or not to continue with Kings and Emperors but government in the sense of self-governance. Without religious edicts telling people what to do, what kind of system would take the place of God’s law?  Just as scientists rewrote the knowledge of the universe, philosophers sought a new epistemology or ground for social relations. But even more urgent was the problem of knowledge.  Without God, what was knowable and how? A new epistemology of knowledge had to be established. The profound secularization that is the Enlightenment has installed suspicion of authority, tradition, and divine right to rule in the West. Using the deductive and logical practices of science, rational thinking, and the powers of human reason, the Enlightenment set out to discover universal laws, to take the place of God. To the extent it was successful, the Enlightenment ended eighteen hundred years of spiritualized thinking.  As Thomas Carlyle said, “Philosophers strove to sink the supernatural to the natural.”  The concepts of “Nature” and “Natural Law” and “Natural Rights” and “Progress” could be used as powerful weapons against traditional powers that once ruled by “divine right.”  The concept of “nature” or the “natural” could be used as powerful weapons to deny participation and power to those declared to be outside the confines of progress, such as women and people of color who were tied to Nature and therefore were beyond the forces of History and thus, the democratic fruits of the new social system. 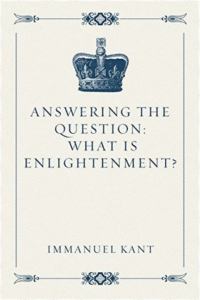 Emmanuel Kant. What is Enlightenment (1784)

Enlightenment is man’s emergence from his self-imposed immaturity. Immaturity is the inability to use one’s understanding without guidance from another. This immaturity is self-imposed when its cause lies not in lack of understanding, but in lack of resolve and courage to use it without guidance from another. Sapere Aude! [dare to know] “Have courage to use your own understanding!”–that is the motto of enlightenment.

Although the Enlightenment could not guarantee fully enlightened thinking, but the alternative to the Enlightenment, with all of its a prorias was, as David Hume, remarked, “..stupidity, Christianity, and ignorance.”  The men who made the new laws were bold, brave and even arrogant, quite capable of using “enlightened” modes of thinking to justify slavery and imperialism, all in the name of European superiority. Indeed in 1784 Moses Mendelsshon remarked in “On the Enlightening Mind,”

Where the enlightening and cultivation of mankind advance with equal pace, they become to each other the best security against corruption, and that civilization of any nation, which, according to the above definitions, consists of cultivation and an enlightened state of the public mind, is therefore the least liable to corruption. A civilized nation has no other internal danger to fear than the excess of its national happiness, which, like the most perfect health of the human body, may be called either in itself a disease, or at least a passage to it. A nation which has through civilization attained the highest pinnacle of national happiness, is for that very reason in danger of falling; whereas it cannot rise higher: but this would lead us too far from the question before us.

In his recent 2010 book, The Enlightenment: A Geneaology, the historian Dan Edelstein, suggested that the modern Enlightenment, apart from its early roots in the writings of English or Dutch philosophers, really began with the French philosophes of the seventeenth and eighteenth century. He credited this century of philosophers as creating not so much an epistemology as a compelling narrative of Enlightenment which explained the ideas of Reason and Natural Rights that would change the culture. It should be noted that there is a reason why the Enlightenment is as Charles W. J. Withers asserted that the philosophical revolution had a particular geographic location: Europe and its tributaries. In his 2007 book Placing the Enlightenment: Thinking Geographically About the Age of Reason, Withers stated that the “where” of the Enlightenment was as important as the “what?” 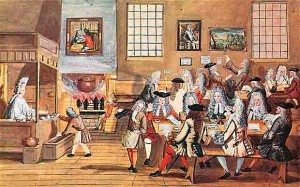 Although international in scope, the ideas of the Enlightenment circulated among the “spaces,” as Withers pointed out, of the coffee houses and salons and drawing rooms of European cities, where people spoke, read and wrote in a limited number of languages–German, French, English and Dutch, that could be translated and circulated within a relatively limited sphere. The geography of the Enlightenment mirrored the geography of the Industrial Revolution and of Imperialism and of urban centers. This demarcated geography put artists, educated young men drawn to cities to study and to make their mark,  in the center of the change. The new philosophical system proposed a new society and a new form of knowledge that would have profound impact upon art and artists, creating new ways of defining both art and artist and developing an entirely new branch of philosophy called “aesthetics.” The idea of “artistic freedom” is an outgrowth of the Enlightenment introduction of the concept of the “individual.”  The idea of the defiant artist, challenging the establishment and shocking the conservative public is an Enlightenment concept of rethinking received wisdom.