ROMANTICISM AS HISTORY IN FRANCE

Neoclassicism was a historicist revival of an ancient style that acquired political and social implications during a time of turbulent change.  Calm and serene, Neoclassicism lent itself well to noble subject matter that depicted the ideals the French public should emulate.  Despite the classical harmony of Neoclassicism, the style was developed during a decade of chaos. Ironically, Romanticism, which in contrast, was a dramatic and dynamic style matured during a decade of peace and calm. The Romantic artists looked back to the Napoléonic age of empire and glory with disappointment and depression that they had been born too late to participate in the great adventure. Although these artists challenged the Salon system that maintained the status quo and the academic style, they did so in a society that was busy turning back the clock of liberalism. Under Napoléon, traditional powers were reinstalled, an emperor took the place of a king, the Catholic Church was restored, and the Code Napoléon, while an efficient legal structure, set the cause of equality back for decades to come. Napoléon reinforced the backward look to his regime by adopting the Holy Roman Empire of Charlemagne as his model to reinforce the concept of “France,” which was a “modern” nation with a long tradition.  On the other hand, Napoléon fought “wars of liberation” to spread the French Revolution over Europe and wound up presiding over an Empire. Once a force of the “liberation” of Europe, the Grande Armée became a force of conquest, control, and occupation, all in the name of “freedom.”

Romanticism in France, evolved out of Neoclassicism’s grand manner as Napoléon’s artists responded to commissions that demanded glorification of his military adventures and martial victories.  But the building of an empire was often a dark and dirty business. Hiding beneath the mask of glory was a very real cost in human life and suffering that demanded a new and sometimes uncomfortable realism. Jean-Antoine Gros glorified Napoléon but could not ignore the reality of war.  The growing public unease mixed with national pride toward Napoléonic wars can be traced through the works of Baron Gros.  From Napoléon at Arcole (1796) to Napoléon at the Pesthouse of Jaffa (1804) and Napoléon at Eylau (1807).  In the decade, the depiction of Napoléon had gone from heroic young leader to noble healer to solemn general leading his horse slowly among the dead. 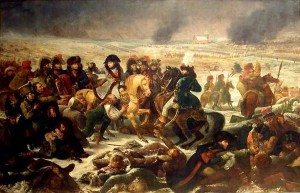 Antoine-Jean Gros (1771-1835) and the other Napoléonic artists could not resort to classical allegory and were forced, by their Emperor’s demands, to represent the contemporary era. Current events seemed far more relevant than ancient deeds from an antique past.  Any lessons the classical era might have had seemed meaningless in the face of modern times of industrialization and total war. The break between Neoclassicism and Romanticism can be clearly seen in the time when France dominated the Continent and plunged Europe into ten years of war. While many artists continued to explore the possibilities of the Neoclassical, artists such as Gros were drawing a distinctive dividing line between Neoclassicism and Romanticism—the new interest in the contemporary and a new concern with one’s own time. For the artists who were accustomed to the Academic style and dictates, the age of Napoléon was a great age for art in France. The Emperor threw himself into a well-organized orgy of looting the cultural heritage of Europe which he transported to France. He stripped European nations of their patrimony and brought thousands of art treasures, large and small, significant and less well known to Paris and installed them in the Louvre, now a public museum. The challenge to Neoclassicism from new artists and unfamiliar art was part of the origin of Romanticism. To be able to see actual paintings by Rubens, his bold brushwork, his bright colors, his restless and dynamic forms was a revelation to French artists.

The French people accepted, as their due, this artistic tribute from other countries. They had few moral qualms about the wholesale stripping and transportation of European culture to Paris. To the new Romantic generation, the French academy ceased to the sole source of artistic ideals. In addition to the unprecedented availability of Continental art, the fall of the French aristocracy had brought a number of important private collections to the market. Most of this art found its way to England, where it was safe from Napoléonic looting. But the looted collections added to the Louvre were returned to their countries of origin, with the exception of a few prize Italian works, still in France. After the fall of Napoléon in the first abdication of 1814 and the final fall in the second abdication of 1815, France returned to a conservative political mode. Napoléon himself had certainly been reactionary when it came to women and the lower classes and he reinstated the Catholic Church, bringing back religious traditions, albeit under state control.  His successor, the Bourbon monarch, Louis XVIII did little to change the France Napoléon left behind, continuing his policy of inviting the émigrés back and restoring the old order, while opening the doors to men of merit. Louis agreed to a constitutional monarchy, modeled after that of Britain, while his successor, Charles X, chafed under such restrictions. 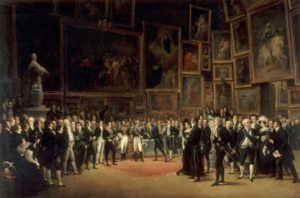 François Joseph Heim. Charles X Bestowing Honours on the Artists at the Salon of 1824

Although the French people had nostalgic memories of Napoléon, they had little patience with the simple-minded kind and revived the old revolutionary fervor in the “July Days” of 1830. Charles X was summarily overthrown in a few short days, called “Days” as a reflection of the “Days,” also in July when the first Revolution began in another July in 1789. The next king who stepped into the vacant throne, Louis-Philippe, was careful to not repeat the mistakes of Charles X and called himself the “Citizen King.”  During the span between Napoléon and Louis-Philippe, Romanticism in France and its counterpart, the avant-garde, was created. Near the conclusion to his classic history, The Age of Napoléon, J. Christopher Herold quoted Napoléon,

‘Greatness has its beauties, but only in retrospect and in the imagination’: thus wrote General Bonaparte to General Moreau in 1800. His observation helps to explain why the world, only a few years after sighing with relief at its delivery from the ogre, began to worship him as the greatest man of modern times. Napoléon had barely left the scene when the fifteen years that he had carved out of world history to create his glory seemed scarcely believable. Only the scars of the war veterans and the empty places in the widows’ beds seemed to attest the reality of those years, and time soon eliminated even these silent witnesses.  What remained, in retrospect and in the imagination, was legend and symbol.

The generation of Romantic artists who matured under the reign of Louis XVIII and Charles X had to be content with a petit revolution and regretted not having experienced the true glory of life under Napoléon.  Artists, such as Théodore Géricault (1791-1824) and Eugène Delacroix (1898-1863), spent their early careers dealing with contemporary political events. Géricault who, like Gros, measured the Napoléonic wars with two paintings of dashing French cavalry officers, both resplendently dressed, but each portrait of a warrior was very different.  The Charging Chasseur (1812) and the Wounded Cuirassier (1814), separated by two short years, span the gap between the glory years just before the disastrous Russian campaign and the year of defeats at the hands of the Alliance of European armies.  Part of a transition generation between David and Delacroix, Gros and Géricault swerved away from the Davidian tradition of heroic Neoclassicism, as seen in Napoléon at the Saint Bernard Pass (1801), and into a hybrid of Romanticism combined with realism, overlying classicism.  Under the reign of Louis XVIII, artists were not bound to producing propaganda and were freed from Napoléonic censorship. Géricault pointedly criticized the new and incompetent government with his Raft of the Medusa, seen in the Salon of 1819. The theatricalized scene, which included a young Delacroix, posing on the raft, was dramatically Romantic, contemporary, and political.  Arriving at the end of France’s time of glory and honor, Géricault’s Raft revealed how dangerous and how forceful art, freed of the dictates of the state, could be. 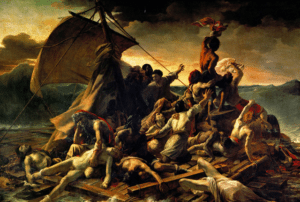 Théodore Géricault. Raft of the Medusa (Salon of 1819)